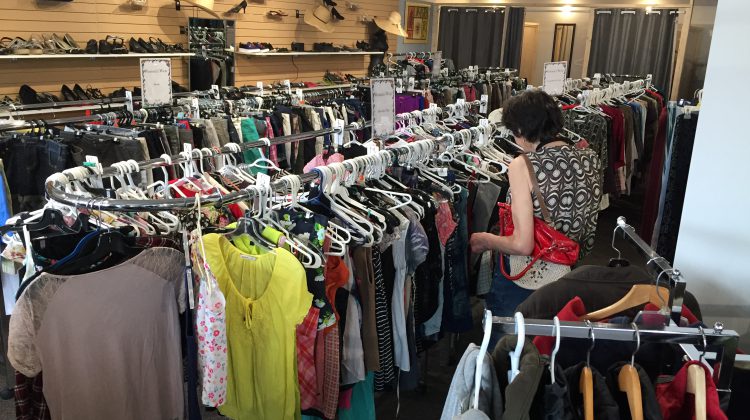 Too Good To Be Threw opened a second location on 456 5th Street on Tuesday. Photo by Troy Landrevlle/98.9 The Goat/Vista Radio

The store now has two locations after opening March 22nd in the former Treasure Shack at 239 Puntledge Rd.

The reason Too Good To Be Threw moved to the Puntledge Road location is because its original store at 367 6th St. suffered significant damage in a fire on Jan. 20.

The society’s executive director, Heather Ney, said the plan has always been to eventually return to the place it has called home since 2008.

“It’s been a very slow process,” Ney said. “It’s all still in the hands of the insurance companies and decisions about demo and what kind of demo and all of that. But it is our intention to go back there, whenever the building is ready again, and we are in constant communication with the landlord, and they want us to be back there. So we’re hoping that will be the outcome in the end. It’s just going to take longer than any of us imagined it would.”

Asked if she could put a timeline on the return to the original location, Ney said the day after the fire, an insurance adjuster said it will be 12 months.

In the meantime, the society decided to open the second location to accommodate the volume of ladies, men, and children’s clothes, shoes, jewelry, and accessories it has received from the public. The second store will be selling primarily fashion items.

Ney said the Puntledge location is “a lot smaller than what we have had.”

“We didn’t appreciate the space that we did have until we didn’t have it anymore,” she added. “So it’s challenging to put out all the offerings that people are donating but we’re managing.”

Donations will be accepted at both locations.

One hundred percent of the revenue generated from Too Good To Be Threw goes directly to the society, which offers assistance to women and children fleeing violence in and around the Comox Valley.

“Many people know us for Lilli House but we also have a residential recovery centre for women, Amethyst House… we have many counselling programs, here, we have a men’s group, we do a lot of work with the homeless, we now have 14 units of housing that we provide in support,” Ney said, “so the government funding is never enough, and the thrift store revenue has been very helpful in filling the gaps, and also for us to address some specific needs that we have identified in the Comox Valley.”