Here’s why Vancouver Island only has one speed camera 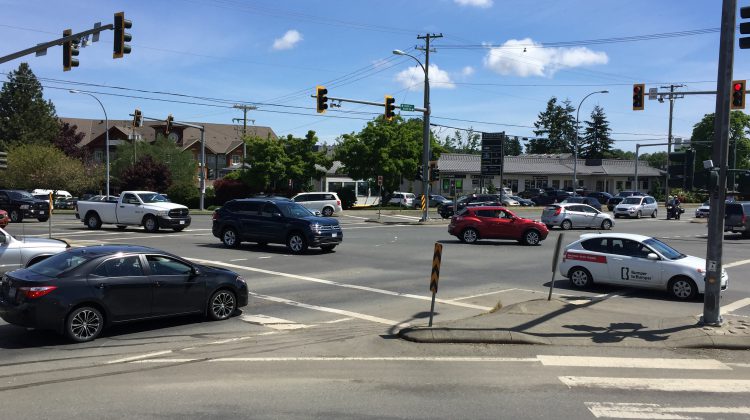 The intersection of Cliffe Avenue and 17th Street in Courtenay is where you’ll find the lone red light camera on northern Vancouver Island. Photo by Troy Landreville/98.9 The Goat/Vista Radio

VANCOUVER ISLAND, B.C. – The province is stepping up enforcement on lead-footed drivers across B.C. this summer, with plans to equip 35 red-light cameras with automated speed enforcement.

But only one of those cameras is on Vancouver Island, and none are on the Sunshine Coast.

The intersection of Cliffe Avenue and 17th Street in Courtenay is where you’ll find the lone red light camera on northern Vancouver Island, but it won’t include this technology. From 2009 to 2013, there was an average of 38 crashes per year at that intersection, according to ICBC statistics.

The lone automated speed enforcement camera location planned for the island is in Nanaimo, at the intersection of Island Highway and Aulds Road.

Courtenay Mayor Bob Wells would like to see hard data that shows whether or not speed cameras are effective in making drivers ease off the gas pedal.

“What has the data shown in terms of, does this actually reduce speeding, does it reduce people running red lights, distracted driving, those kinds of things,” Wells said. “That’s the outcome that we’re looking for. If it’s just going to generate revenue, although obviously that is a benefit, it can’t be… the one that stands above all others.”

Ensuring we have safe roads and reducing distracted and aggressive driving are “the biggest goals” the province should look to achieve, according to Wells.

“If the data shows that this is what happens, then that’s great,” he said. “One of the challenges that I have is, how many people know that (Cliffe and 17th) is a red light intersection?”

He said speed readers set up around the City of Courtenay is bringing awareness to excessive speed. He noted one that has been erected at Valleyview Elementary.

“It gives you immediate feedback of your speeding, especially in a school zone,” Wells added. “The intent there is to make people slow down where they should be slowing down. And I think the data shows that when you get that immediate feedback, that it does affect people’s driving immediately, but it can have those long-term effects as people notice that their speed is being monitored.”

A ministry spokesperson told the MyComoxValleyNow.com newsroom said the decision to install automated speed enforcement technology is based on the number of crashes and their severity, the prevalence of the speeding through the intersections, the general potential to reduce collisions, and the “technical feasibility of that particular intersection.”

The spokesperson said “there is potential” for more automated speed enforcement at B.C. intersections that don’t currently have that technology.

The decision to add speed enforcement to red-light cameras comes after the government completed its analysis of speed and crash data for the 140 Intersection Safety Camera (ISC) program sites currently equipped with red-light cameras.

The province has identified 35 intersections with the greatest potential for further safety gains through automated speed enforcement – and 32 of them are in the Lower Mainland and Fraser Valley, including 12 in Vancouver and seven in Surrey.

Beginning this summer, B.C. will install new warning signs and activate technology to ticket the registered owners of vehicles entering these intersections well over the posted limit on a red, yellow or green light.

Between 2012 and 2016, ISC sites in B.C. reported an average of 10,500 vehicles a year going at least 30 kilometres per hour over the posted speed limit, as detected by red-light cameras, which also monitor vehicle speeds. Speed has been one of the top contributing factors in casualty crashes at these intersections, which have had a combined total of more than 11,500 collisions per year.

“We have a record number of crashes happening – more than 900 a day in our province – and about 60 percent of the crashes on our roads are at intersections,” said Mike Farnworth, B.C.’s minister of public safety and solicitor general.

“We’ve taken time to systematically pinpoint the locations linked to crashes and dangerous speeds that are best suited to safely catching, ticketing and changing the behaviours of those who cause carnage on B.C. roads.”

Farnworth said that to discourage high speeds at these 35 locations, neither government nor police will disclose the speed threshold that will trigger the new cameras.

According to a government release, this is consistent with every other Canadian jurisdiction using automated speed enforcement.

Depending on continued monitoring of the ISC program and evaluation of road safety outcomes, that threshold may change in the future.