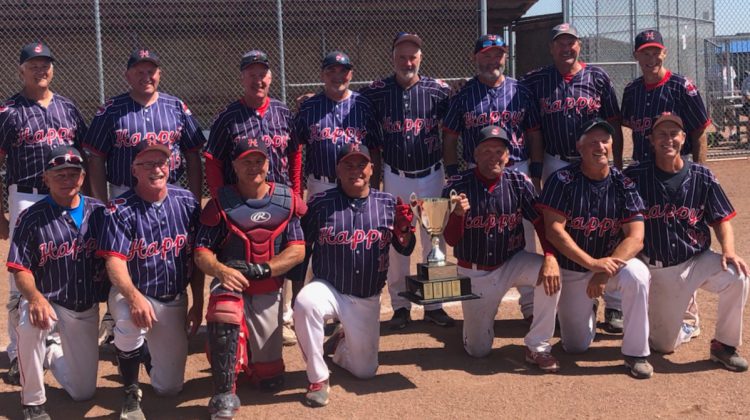 The Comox Valley is home to Canadian champions.

They are the Happy’s Source for Sports Islanders 57-plus baseball team.

The tournament included teams from across the country playing in four divisions: 35-plus, 43-plus, 50-plus, and 57-plus.

The Islanders once again represented the Comox Valley in the 57-plus division.

In 2018, the team did not travel to the championship held in Charlottetown.

The other teams in the division this year included Hamilton, Dufferin-Simcoe (Ontario), Red Deer, Spring Lake (Alberta), and Saskatchewan.

With 6 teams in two groups, the Islanders played its three-game round-robin against Saskatchewan, Dufferin-Simcoe, and Spring Lake.

They stumbled out of the gate, however, with a surprising 9-5 loss to Saskatchewan to open the tournament.

But the team bounced back in the second game of its Friday doubleheader to double Dufferin-Simcoe 6-3.

In the final round-robin game, the bats went silent as Spring Lake edged the Islanders 4-2.

This meant the local boys had to play an extra playoff game and find their way through the back door if they hoped to challenge for the title.

Saturday’s two vs three playoff game was the breakthrough for the Islanders as the bats kicked into high gear.

The result: an 11-1 mercy victory in four-and-a-half innings.

After that, the Islanders had found their rhythm and pounded the division-winning (and defending champion) Red Deer Legends 12-4.

The weather on Monday, as it had been for the entire tournament, was perfect for baseball.

The Spring Lake team, a finalist in 2018, was ready to step up and take the trophy.

From the first batter in the first inning, however, the Islanders pressured Spring Lake and did not let up.

But after three innings, the game was tied 1-1, even though Happy’s had several runners on base each inning.

The fourth inning finally saw the gates open and the runs increase.

By the 6th, it was 8-1 for the Island crew and the team cruised to an 8-2 victory and the team’s third national title.