Deconstruction of Kus-kus-sum set to begin this month 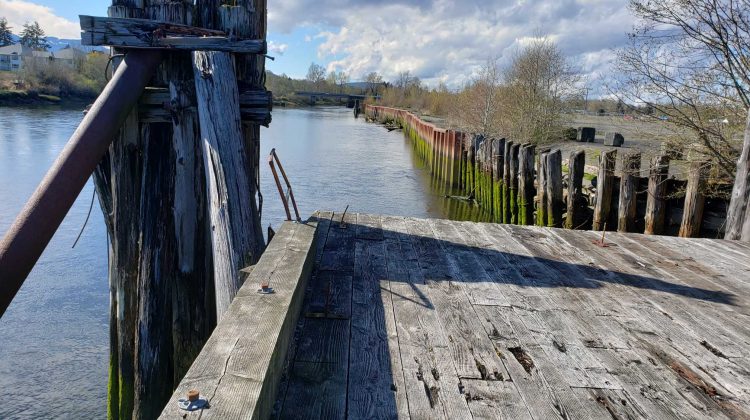 Part of the dock and piling that is set to be removed. (Photo supplied by Project Watershed)

The removal of some infrastructure at Kus-kus-sum is set to start this week.

Comox Valley Project Watershed Society entered into an agreement with Interfor to purchase the property in 2017.

In order to transfer the water lot leases to the society, Interfor must remove part of the dock, pilings and several poles strapped together with cables The removal of the improvements is set to start this Thursday and is expected to take one to two weeks. Project Watershed’s Manager of Fundraising Caila Holbrook says once the site is purchased they will focus on restoring it.

“Once we have purchased the property we can start on the restoration. Our first thing to do will be to remove the cement and that will be a big job because it is a foot deep in some places.”

“After that, we will be looking to regrade the site, so dig out a whole bunch of the soil… and then once it’s regraded we will plant some open channels that connect to the Hollyhock area.”

“In all this should take between two and three years, once we get going it will be quite a quick process,” Holbrook added.

Project Watershed has currently raised $2.4 million of the $6.5 million they estimate is needed to purchase and restore the site. The organization has also submitted a one million dollar grant application to the Federal Government through Canada’s Nature Fund.

It hopes to raise $35,000 by October 20th to make the next payment. To donate or find out more about the project visit www.kuskussum.ca.

UPDATE: The work is now scheduled to begin Monday, August 19th.  Not Thursday, August 15th, as was originally planned.