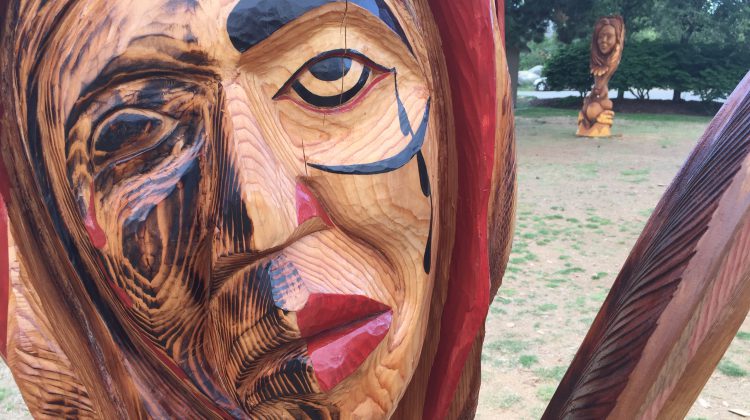 It’s a standing memorial, and a tribute to those we’ve loved and lost.

A piece symbolizing missing and murdered Indigenous women and girls sits amongst the carvings at Campbell River’s Frank James Park.

It was created by Junior Henderson and his brothers during the Transformations on the Shore chainsaw carving event in late June.

Henderson was inspired by the red dresses he saw hung up throughout Port Hardy.

“I had asked somebody, ‘What’s with all the red dresses?’ And they said, ‘Oh, that’s in recognition of the murdered and missing Indigenous women.’ I didn’t know much about it so I inquired a little bit and of course the chainsaw carving competition was coming up and I thought, ‘I wonder how many other people are like me that really don’t know about this?’”

But before moving forward, he got permission from someone close to the situation.

A note attached to the carving says that the homicide rate for Indigenous women is roughly 4.5 times higher than that of all other women in Canada.

“Before colonization, our women and girls were treated as sacred and highly honoured,” the note says. “May this carving serve as a reminder that as members of this community, we must do better!”

Henderson said that the piece depicts a woman in mourning, holding a single feather.

“Kind of dark on one side, and crying on the other,” Henderson said. “It’s just a sad situation so that sad face I thought I’d put on there. It ended up the way it ended up because of the cooperation of three good artists.”

Henderson was happy with the way the carving turned out.

“It sends that sad message, that’s for sure,” he said. “I’ve had a few people come up to me and tell me that just by looking at it, brought a tear to their eye. And I was like, ‘oh wow, that’s really inspiring that I was able to move you like that. It was kind of doing its job as just a piece of art.”

This is one of many pieces of art created by Henderson, who has been carving for 24 years and has been involved in chainsaw carving for 17 years.

This carving took Henderson and his brothers, Jonathan and Greg, roughly two-and-a-half days to complete but it will stand for years to come in the city.

In talking to the mayor, Henderson initially thought of Spirit Square as the carving’s next destination but there were fears of it being vandalized.

So Henderson’s second option is the women’s centre.