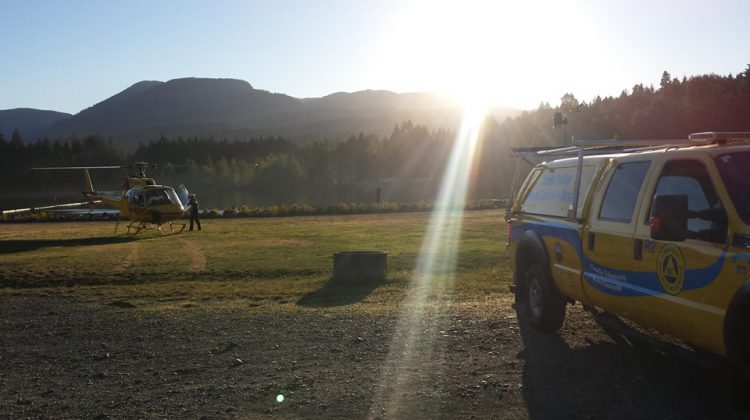 Comox Valley Ground Search and Rescue members are on track for their busiest year on record.

The group has had 40 calls this year, which is slightly ahead of last year’s record-setting number.

Manager Paul Berry said the past few days have been particularly hectic.

“We would have done, including yesterday, four operations in the last five days.”

“And as a result, things happen and they need support when they do,” he said.

A busy weekend locally spilled into the week, with members helping out with high profile searches near Nanaimo and Mackenzie.

On Monday, seven members travelled to Lantzville to help search for 75-year-old Wayne Strilesky, who suffers from severe dementia.

He was found by a K-9 team member from Nanaimo. The search involved search and rescue teams from as far north as Campbell River.

“He was located in very dense bush, not all that far from his residence but he had not been detected by the police dogs the evening before or the search dogs that had passed by that location,” Berry said.

Berry said in B.C., having multiple SAR teams from different places  working together is a very regular occurrence, especially with a high urgency search.

“An elderly person with dementia requires a significant number of resources,” Berry said.

Berry is one of the senior search managers on the island and only certain ones can manage large-scale scale searches with multiple teams.

“That’s why I was there, and Comox Valley members were (there) to assist and put more boots on the ground to locate Mr. Strilesky,” he said.

Closer to home, the team is asking, what is it about 3:00am in the morning?

CVGSAR was activated three times over the past weekend, twice in the wee hours of the morning.

The first was early Saturday morning for two lost hikers in the Forbidden Plateau area.

The second, just after 2:30am on Sunday, was to help Campbell River Search and Rescue with the  search for a missing youth near Zeballos.

All three were found, safe and sound.

Meanwhile, CVGSAR member Chris Dicks was in MacKenzie, B.C. to provide Critical Incident support to SAR members involved in the search for a missing 4-year-old boy.

That search also had a happy ending.

George Hazard-Benoit was found after spending 30 plus hours in thick dense woods in the Lions Lake area.

George was reported missing after he became separated from his mom while she and a friend were berry picking.

Dicks was part of  the critical incident stress management team.

“They’re pre-positioned in the event that the subject may not be found and just helps the searchers deal with the trauma and the stress of those difficult high-profile searches,” Berry said.

Unpaid, professional Search and Rescue teams from across B.C. operate 24/7, 365 days a year to assist those in need.