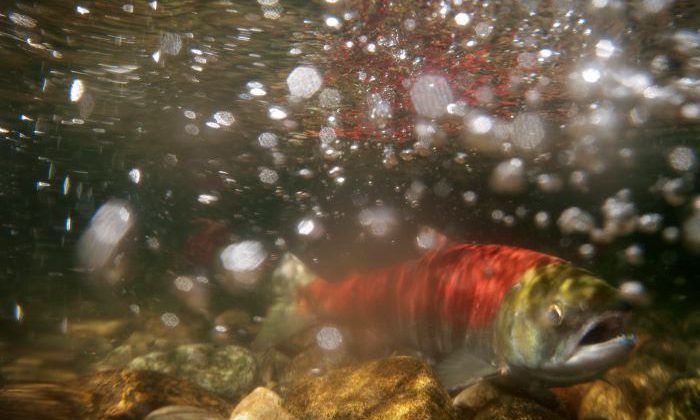 Wild salmon. (Supplied by the Province of B.C.)

The province and First Nations governments are marking the progress in protecting wild salmon in the Broughton Archipelago.

They spoke about the progress made since recommendations were delivered in December 2018.

These recommendations were a result of what the province is calling a “groundbreaking government-to-government” agreement between it and the three First Nations.

“The progress we are marking today began with a trip I took with ministers Lana Popham, Scott Fraser and (North Island MLA) Claire Trevena to Alert Bay less than two years ago, after being invited to listen to long-standing concerns about salmon farming,” Horgan said.

“In partnership with three First Nations in the Broughton, through a process built on reconciliation and respect, we are taking important steps forward to restore wild salmon stocks and support communities.”

‘Namgis First Nation Chief Don Svanvik said, “we are pleased to be taking this step forward with the Province of British Columbia and the fish farm industry. This is a monumental step in recognizing the interests, values and jurisdiction of Indigenous peoples in Canada.”

The province says achievements made in the last nine months include:

“The Broughton process, and the implementation of the resulting recommendations, are important for wild salmon and the coastal economy,” said David Kiemele, managing director of Cermaq Canada. “We are proud to be part of this historic and precedent-setting agreement.”

“We knew when we started the government-to-government discussions that we had found a way of collaborating that could be used as a model going forward, and the results so far have been remarkable,” said Popham, who is the Minister of Agriculture.

“The progress has all been possible because we worked hard to ensure people could come together and find a different way of doing things, and the success we’ve had makes it clear that new way is working.”

In June 2018, the three First Nations and the province formalized their ongoing talks regarding salmon aquaculture in the Broughton area and established a joint decision-making process.

In November 2018, they submitted their recommendations, which resulted in an agreement in December 2018 to protect and restore wild salmon stocks, allow an orderly transition plan for salmon farms in the Broughton area and create a more sustainable future for local communities and workers. The recommendations were also agreed to by the two fish farm operators in the region: Mowi Canada West (formerly Marine Harvest Canada) and Cermaq Canada.

The province says the protection of wild salmon in the Broughton area “is another step towards reconciliation with First Nations in B.C., creating a predictable path forward for Indigenous, business, labour and municipal leaders throughout the province so all British Columbians can work together to build a more prosperous and sustainable future.”

The three projects were funded through the $143-million B.C. Salmon Restoration and Innovation Fund.

The purpose of the fund is to advance work to enhance salmon habitats to help support B.C.’s fish and seafood sector, and help secure the sustainability of wild Pacific salmon, as well as other wild fish stocks.