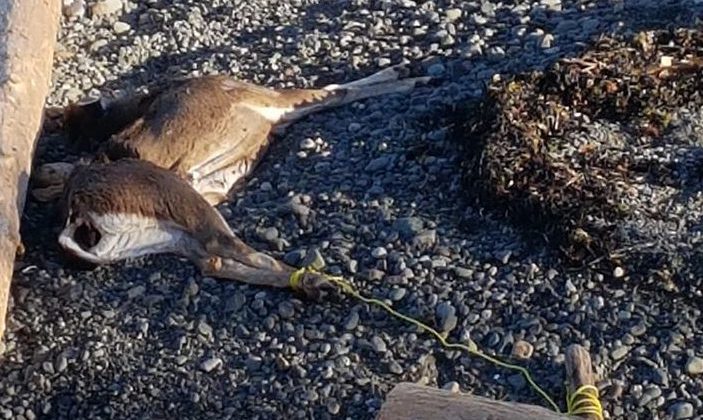 Cindy Bachand took this photo of a deer carcass tied to a piece of wood on Monday afternoon, October 27th. (Cathy Bachand, Facebook)

It’s a disturbing discovery on the shores of Campbell River.

While walking her dog near Discovery Pier yesterday afternoon, Cindy Bachand came across a deer carcass on the beach.

When she took a closer look, Bachand said what she saw shook her up.

Its hind legs were bound with rope, which was tethered to a chunk of  wood.

“It just didn’t sit well with me so I thought about it for a bit and then I called the RCMP and they were going to call the conservation officer and have it dealt with,” Bachand said.

Steve Petrovcic, a Conservation officer in the North Island zone, responded to the call but couldn’t find the carcass.

Petrovcic said it’s illegal to harvest an animal and not utilize its edible portions.

But he wasn’t able to confirm the cause of death, Petrovic didn’t want to jump to conclusions.

“I have had reports, as have other officers in the zone and throughout the province, where sometimes an animal is struck, the animal dies in someone’s yard and sometimes that homeowner doesn’t have the ability to load up and remove that animal,” Petrovcic said.

“If it was, in fact, a situation where this deer was struck, ended up dying in someone’s yard and someone didn’t have the means to remove the animal and if they thought that was an appropriate way to dispose (of) the carcass, sort of drag it to the ocean and let the scavengers access the carcass… sort of that whole cycle of life perspective.”

Bachand said her first reaction was who would do such a thing, but after posting the photo of the deer on Facebook, she said several posters had other scenarios “that I guess would be possible as well.”

“It did start to make me wonder, well maybe it wasn’t foul play but it just didn’t seem right,” she said.

Meanwhile, the image is still imprinted in her memory.

“It still disturbs me,” she said. “I still keep kind of picturing it.”