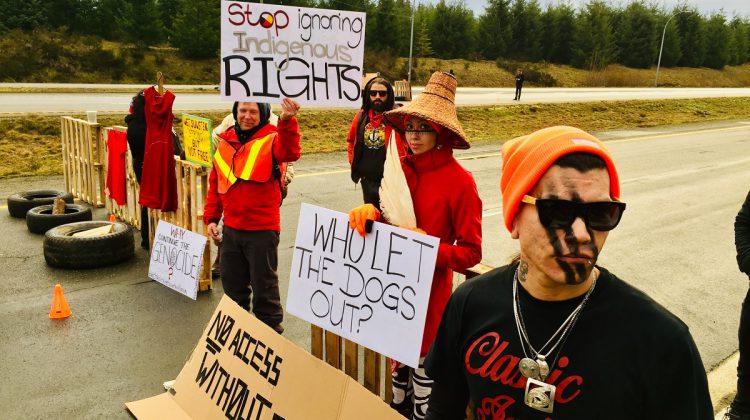 There’s a significant traffic backup on the Inland Island Highway this morning.

The Comox Valley RCMP has confirmed protests in support of the Wet’suwet’en are happening.

One is on Highway 19 southbound between Minto Road and Comox Valley Parkway.  The ramp has been closed and a detour is in place.

The other is on Highway 19 northbound between Buckley Bay Road and Van West Logging Road 15 km south of Cumberland.  A detour is in place there as well.

The RCMP was not able to say how long the protests are expected to last this morning. We’ll have more details as they become available.

Deraek Menard was among those manning barricades set up along Highway 19 in Courtenay.

“We need two things to happen. One, we need premier John Horgan to order the RCMP to stand down, to get off of Wet’suwet’en territory. They are currently trespassing. What they’re doing is illegal under Canadian law,” Menard said. “And the second thing is for Prime Minister Justin Trudeau to enter into nation-to-nation negotiations because this is Wet’suwet’en Nation, and this is Canada as a nation, invading that nation.”

Menard said plans for the blockade were put together overnight.

“We started the barricade at about 12:30 in the morning, and so we haven’t had any sleep,” Menard said.

He also justified the criticism that he says “gets leveled at these types of actions.”

“This battle has been going on for decades at this point,” Menard said. “We have gone through traditional channels through the regular structure, the way it is, we’ve gone through the courts, we’ve spent millions of dollars and nothing has changed. First Nations’ rights are still being stomped on. The Canadian constitution has actually ruled that this actually is illegal what is happening right now. Back in ’97 it was ruled this way: hereditary chiefs have the right of this.”

Menard said these “actions” are all about raising awareness.

“Yes, we want attention because nobody’s paying attention,” he added.

He added that liquid natural gas is not a sustainable resource.

“There is a mountain of scientific evidence at this point, that with fugitive emissions, is a really, really huge cost of this from fracking it, it’s not as harmful if it’s not gotten by fracking, but I don’t actually know of any other way to get LNG,” he said.

Menard said it isn’t LNG itself, but the way it’s produced: “It actually has a worse CO2 equivalent emission global heating effect, than coal production and burning does. It is as much of a climate killer as coal is.”