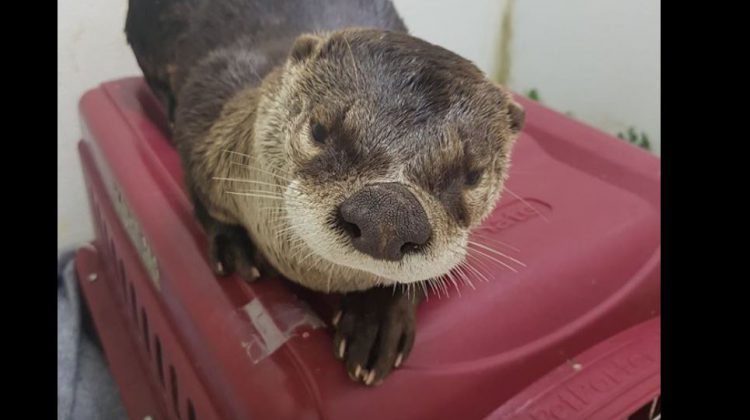 A male river otter is under the Merville centre’s care after it was rescued over the Family Day weekend.

The otter was hit by a car near the 17th Street Bridge and was found lying in the middle of the road.

Once it was approached, the otter proved hard to capture for the person who brought it into the centre.

“He wouldn’t really let her get near him, obviously, because he’s an otter. But she waited and watched him for a while and then eventually he kind of just gave up,” MARS assistant manager of wildlife rehabilitation, Kiersten Shyian, said. “She was able to pick him up and bring him to us which is really quite amazing because he is very feisty and very slippery.”

The otter has a fractured tooth, a concussion, cuts on his feet and chin, and he may have a fractured scapula in its shoulder.

Now, MARS is asking for donations because the otter has quite an appetite.

“Overall he’s doing very well,” Shyian said. “He’s definitely improved since he came in. He’s eating very well. We feed him a lot of fish, and dog kibble and eggs and stuff like that. And we’re actually running pretty low on fish right now. They definitely like herring and salmon so we could definitely use more of that for him.”

If you have fish in your freezer, or recently caught fish to donate to the centre, you can drop it off. The centre’s hospital is open from 9:00am to 5:00pm, seven days a week, and the visitor centre is open from Thursday to Sunday.

The otter’s prognosis is “pretty good,” Shyian said: “He still has minor head injuries and his tooth is broken, but he’s eating really well without that tooth. Most of the tooth is still there, the tip is broken off. He’s improving quite well, he’s a lot more active now and he’s very food motivated. He’s eating a lot. I think he will be, hopefully, releasable.”

If it wasn’t for his rescuers, the otter would have been vulnerable in the wild.

“He definitely did have a concussion so if he had been out there in the wild, he couldn’t hunt with that concussion, and he probably would have gotten pretty skinny,” Shyian said. “He’s on medication now. We’re doing the best that we can but they definitely played a huge part in helping him survive.”

The last time the centre had river otters in its care was two-and-a-half years ago, when three orphaned pups were brought in.

“They are definitely really cool animals and we don’t see a lot of them here,” Shyian said.