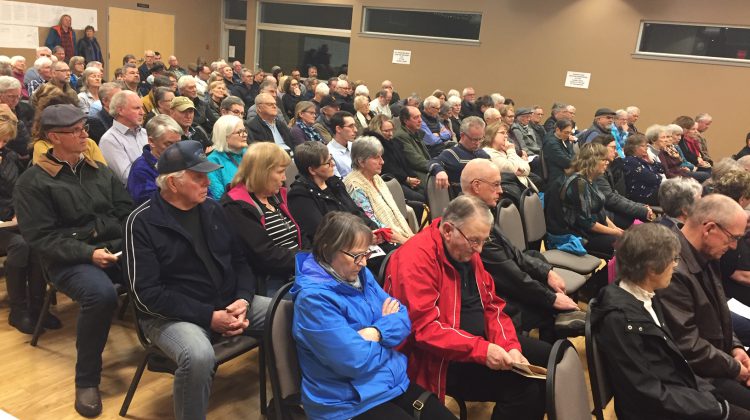 Residents packed into a room inside the Comox Community Centre for a public hearing about rezoning to accommodate a proposed development on Aspen Road. (Troy Landreville, MyComoxValleyNow.com staff)

Too big, too much traffic, too much density, and way too many people moving into the neighbourhood.

Those were the common concerns during a fiery public hearing about a proposed development in Comox.

More than 170 people packed into a room at the Comox Community Centre on Thursday night.

Several speakers were opposed to a project that includes three four-storey apartment complexes and one four-storey, mixed-use residential/commercial building at 695 Aspen Road.

However, there were a few others who support the project. The seven speakers in support pointed out Comox Valley’s low vacancy rate of 1.4 percent, the challenge of finding housing, affordable or otherwise, as well as a lack of rentals, and how the vacant property will finally see development.

But the rezoning hasn’t passed third reading, nor has it been approved by the council.

Bob Martin was among those opposed to the rezoning, which will pave the way for the development.

“There will be too many people, too many cars, too much general activity for an area of town which has enjoyed a very healthy pace of life,” Martin said.

Martin said he hopes the council “has the good sense” not to approve the rezoning.

“It is far, far too large and (a) grossly disruptive action, for this small section of our town,” Martin said.

Ian MacDonald said if built, the development will impact him in a variety of negative ways.

“Initially my concerns were focused on the sheer numbers of new residents the proposal will bring into the area, and the impact that this upsurge will force on the existing community and the general infrastructure,” he said.

He said that despite the best efforts for the developer to portray this development in a positive and benign light, “my concerns have not dissipated but have in fact grown.”

He said the construction phase alone will be disruptive to the area.

MacDonald added that the density the completed development will bring will simply be too much for the area to handle.

“Once built, the number of new residents and their accompanying vehicles will without a doubt, forever alter the face of the existing community fabric,” he said. “The proposed four, four-storey buildings will loom large over existing structures, and to many of us, the appearance does not complement or even blend well with other homes in the neighbourhood.”

Allison Banting’s home on Murrelet Drive is right across the street from the property.

Banting believes the construction is a “done deal.”

She said her biggest concern was the traffic on her street, especially before and after school at Aspen Park Elementary.

“It’s already congested and if you don’t come down and see it for yourself, you should,” Banting said. “It’s a mess. People do 70 clicks on that road. There’s kids going to school… everything, and I don’t think anybody from the Town of Comox or Highstreet has gone down that road in the last five years, because it’s gotten worse. You’ve got to consider how many people you’re putting into this area and how many cars it’s going to bring in.”

The plan is for “Aspen View” to include 73 one-bedroom/one-bathroom units, and 159 two-bedroom/two-bathroom units for a total of 208 rentals and 24 for-sale condos.

Highstreet is proposing to make a cash-in-lieu contribution of $142,932 to the town’s Affordable Housing Reserve Fund.