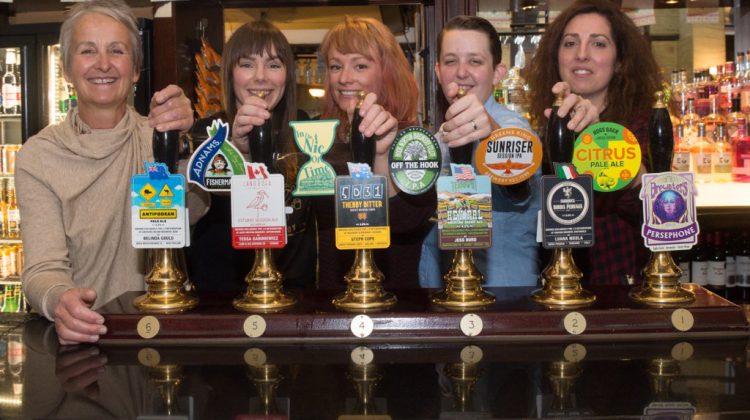 The head brewer of The Land and Sea Brewing Company in Comox, Tessa Gabiniewicz was one of five women in the world to be invited to share their beer across the United Kingdom. From left to right( Belinda Gould-New Zealand, Tessa Gabiniewicz-Canada, Steph Cope-Australia, Jess Nurd-United States, Luana Medla-Italy) Photo provided by Tessa Gabiniewicz

The head brewer of The Land & Sea Brewing Company is putting Canada on the international map.

Tessa Gabiniewicz recently got back from Britain where she was representing Canada at an elite gathering of brewers.

Every year JD Wetherspoon, a company that has a fleet of more than 900 pubs in the United Kingdom, hosts guest brewers from around the world in a spirit of international collaboration and cooperation around all things beer.

This year it celebrated female brewers and Gabiniewicz was one of only five women in the world to get the invite.

She was joined by women from the United States, New Zealand, Australia, and Italy.

Gabiniewicz says the company didn’t even try her beer beforehand, they sent her an invite because of a recommendation from a friend. 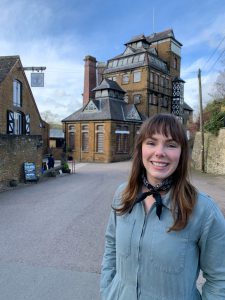 “Gary Lohin with Central City Brewing and Distilling has gone a couple of times and when they reached out to him to ask if he knew a brewer he would like to send along, he said my name.

That was an honour in itself because I’ve been drinking Gary’s beer since I started brewing 11 years ago and he’s a living legend for me, so that was pretty cool,” says Gabiniewicz

“It was such an honour. I was floored that I was asked. I wasn’t expecting it whatsoever.”

She added that the beer JD Wetherspoon chose was her Estuary Session Ale, which features British Columbia spruce tips.

Gabiniewicz says that it created a bit of a problem.

“So typically when I’ve brewed that beer last spring when the spruce tips were in season I went out and hand-harvested a couple of kilograms and came in and brewed that day and threw them in. But when they said they wanted the Estuary Session Ale, I thought oh great, thinking it would be maybe 2000 liters, something like that. But when I found out it was 40,800 liters and I needed 80 kilograms of spruce tips I was sweating a little bit because I can’t bring a tree from Canada over to England.”

The solution to her dilemma was solved thanks to a local tree farm who was able to grind up the spruce pellets, combine them with hops, and turn them into pellets so it was easier to package and ship overseas.

Now her Estuary Session Ale, local to the Land & Sea Brewing Company in Comox will be showcased at the world’s biggest real cask-ale festival in the United Kingdom from March 25th until April 5th.