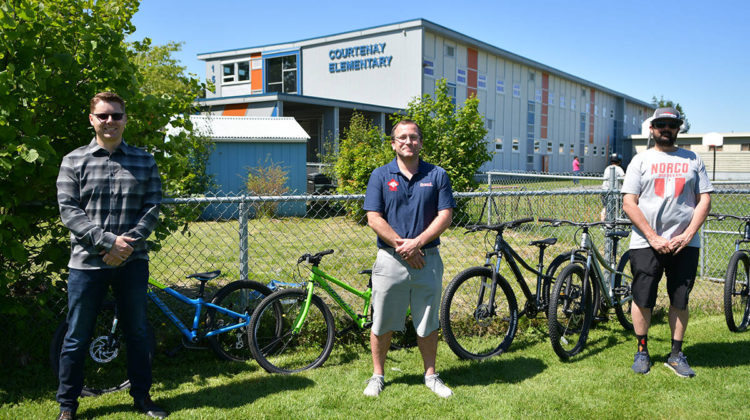 The Comox Valley helped Courtenay Elementary restock its inventory of bicycles that were stolen during the winter.

At a social-distancing donation celebration last week, school staff and students took in the brand-new collection of donated bikes.

Over the winter, eight bicycles were stolen from school property leaving the students without a way to learn cycling skills, to participate in outdoor learning activities and use them as an environmentally friendly option to commute on field trips.

Jeff and Jen Beeston of Trail Bicycles initially provided the bikes for the kids and after hearing that they had been stolen, they decided to raise funds to help replace the collection.

The Beestons launched an in-store fundraiser, never expecting the outpour of community support in response.

“It was crazy how many people came into the store and donated or emailed. We raised enough funds to purchase another five [bikes] and supplies with the money raised in the shop,” Jeff Beeston said.

“You never know how a fundraiser will turn out. You just don’t know if the momentum will catch hearts and spread like wildfire in the community or not.”

Jason Rosvold of Shaw Cable explained that having the station so closely located to the school on McPhee made it feel more relevant to do a good neighbourly deed with a donation of $2,000.

“Many of these students walk right by our door and we wanted to be a part of the solution.”

SD71 says Courtenay Elementary was able to recover a few stolen bikes and had a few others still in storage, so in total, thanks to the 11 newly donated bikes, the school was able to increase its inventory to 18.

To see a video of the celebration and donation of the new bikes, click here.