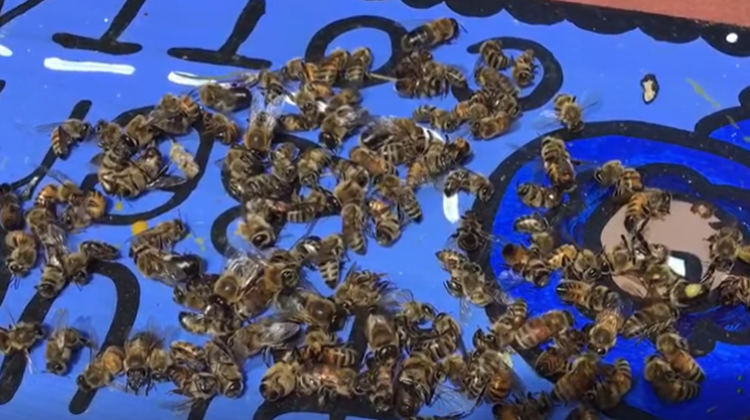 A Vancouver Island beekeeper is sounding the alarm about pesticides.

Chantel Parsons said she lost over 200 bees due to what she believes is possible pesticide/herbicide use within five kilometres of her house in the Comox Valley.

She said the rest of the hive seems to be okay now, “but this was alarming and very sad.”

Parsons said just over a week ago, her daughter noticed some of the dead bees near their hive.

I lost about 200+ bees last week due to possible pesticide/herbicide use within 5km of my house. This is what pesticide poisoning can look like, bees writhing, stumbling, unable to walk, tongues sticking out, pooping uncontrollably, dead…this video is of my bees last week. The rest of the hive seems to be okay now, but this was alarming and very sad. 🐝💔. The bee inspector suspects pesticide poisoning. ☹️. Please be careful with what you spray in your yards.

“I went to the front of the hive and looked, and there was a collection of them on the landing board,” Parsons said. “I thought that was kind of strange and then I took my hive tool and scraped a bunch of them out from underneath, and they were kind of alive but they were all writhing and flipping themselves over, and they couldn’t fly and they were stumbling.”

She said that when she touched them with her hive tool, they were “pooping, and they’re not really supposed to do that.”

Parsons took a video of the bees and sent it to a bee inspector who tested them for Nosema, a serious disease of adult European honey bees, including queen bees.

They came back negative, so the inspector suspected pesticide poisoning.

Parsons said that the bees likely brought the pesticides into the hive.

“Let’s say someone sprayed their dandelions because they hate dandelions, and my bees went and got pollen and nectar from the dandelions. Bees are very social, so they groom each other, they probably share some of the nectar, they help each other get the pollen off, so it kind of gets spread that way.”

As a beekeeper, Parsons said she is not a fan of pesticides. “They harm my bees and they harm the wild bees, as well. It’s one of those issues where lots of people like to use them because they don’t like dandelions or weeds on their lawns and then my bees inadvertently get into them and meet their demise. Pesticides are harmful to all the insects, good and bad.”

Parsons’ advice: be careful where you spray, and embrace the weeds, especially dandelions.

“I would like people to leave the dandelions because they’re a really good nectar source for the bees and a marker for spring,” she added.

Bees are a critical species. More than two-thirds of food crops we eat need native bees, honey bees and other pollinators to successfully produce a crop.

“Bees pollinate almost all the food that you would eat coming from a grocery store or farmers market,” Parsons said. “So no bees, no food.”