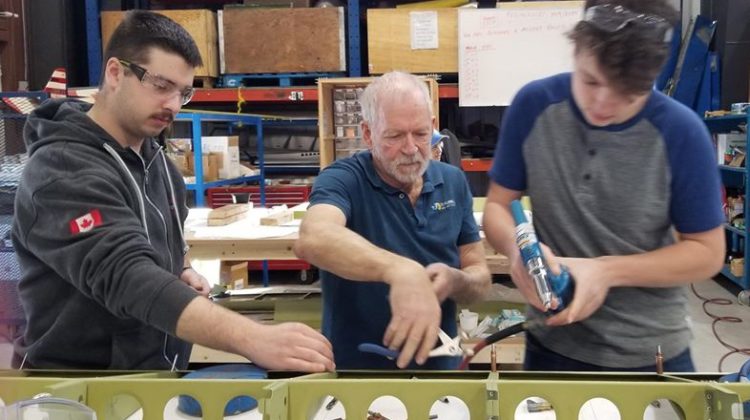 Teens in Campbell River and surrounding areas are soaring to new heights.

They’re able to explore the world of aviation through TeenFlight Campbell River, a free program that’s now accepting applications from those ages 15 to 18 for its fall session.

Board member Therisa Lowe says participants not only build an aircraft alongside experienced mentors, but are also shown the possibilities of aviation as a career path.

“There’s an endless amount of jobs involved in aviation that someone might not think about at that age,” Lowe says. “During the course of the time that the children are involved, they actually get a lot of hands-on skills. They go through a process where they build a kit aircraft. It’s something that’s unique.”

Though the program has been running for seven years now, Lowe says she talks with a lot of people who don’t even know it exists.

“TeenFlight operates worldwide,” Lowe says. “Campbell River is home to the only TeenFlight program in Canada.”

She says that there are so many other programs for teens, but there’s quite a cost to them.

“The value point of this program is incredible. They go over things like theory of flight, tool and shop safety, the physics of flying, and different types of aluminum. There’s such a large scope in it.”

As TeenFlight is a subsidized program with no cost to its participants, donations play a vital role.

“There’s quite a cost to running it. It’s a structured program, but with our fundraising it’s free. The only thing it costs is the dedication of the students to the program,” Lowe says.

The program looks great on a resume as well, Lowe adds, especially when sending out post-secondary applications.

“Most of the kids now that have gone off to apply for college, they actually call back to get a reference letter from the program.”

The TeenFlight program is held near Campbell River’s airport at Sealand Aviation.

Lowe says classes are twice a week, but the schedule might change for the upcoming fall session.