‘This has to stop’: mom weighs in on overdose crisis 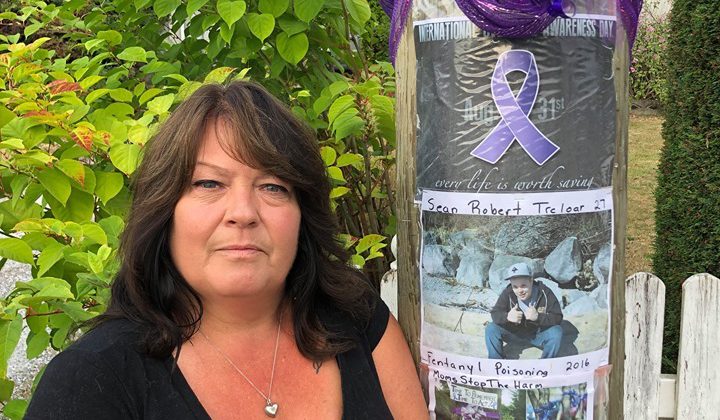 Powell River resident Darlana Treloar is promoting the Purple Ribbon Campaign for Overdose Awareness. She lost her son Sean to a fentanyl overdose in 2016. (Supplied by Darlana Treloar)

A Powell River mom who lost her son to an overdose believes the province can do more to save others from the same fate.

Since Sean’s death, the province has seen a spike, especially recently, in deadly overdoses.

The BC Coroners Service reported 175 deaths in June, marking the second straight month that B.C. has reported the highest monthly total for drug overdose deaths.

With that in mind, Treloar says the numbers tell the story.

“This needs to stop,” she said. “There were 175 people who passed away from overdose in June. That’s six people a day.”

She says the province must take certain steps to help save lives.

“We need harm reduction, we need overdose prevention sites, we need detox, rapid access treatment, we need programs for people in recovery, and we also need current education at the elementary school level. And, we need to focus more on men’s mental health.”

Treloar also believes that safe supply and decriminalization will help take potentially deadly drugs out of the hands of users.

There are faces behind the overdose numbers.

One of those is Sean Treloar.

Darlana says her son was the third person in Powell River to die after using fentanyl over that general time period in 2016.

She says they did everything they could to help Sean overcome his addiction. He spent six weeks at a treatment centre in Comox.

“I wish that he had stayed longer because really, they need to be in much longer than that and then have programs afterwards for their aftercare,” Treloar said.

Sean was on the right track for a while but gradually fell back into his old ways, his mom said.

Treloar has another son living in Victoria and a daughter in Cumberland, both of whom she describes as “very successful.”

“They didn’t follow that same path,” she said. “Thank goodness.”

But the void left behind by Sean will stay with her for the rest of her life. Treloar says she has normal days along with some very bad days.

“It’s been four-and-a-half years so the pain does ease, but it ebbs and flows. You just never know when an episode of hurt is going to trigger you and it can ruin your whole day. It’s just really sad. We (parents of overdose victims) miss them. We miss them a lot.”

She described Sean as a funny guy who was full of lots of character and spark. 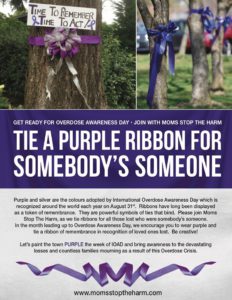 “There was always something different with Sean compared to his brother and sister. He was a lot more curious but he also loved to go hiking and camping, and fishing. He and I would go mushroom picking, seasonally, all the time for pine mushrooms. He just loved the outdoors (and) adventuring,”  Treloar said.

He also had a very caring side, according to his mom.

“He did not like to hurt animals or people,” Treloar. “He was a very compassionate, caring young man.”

Treloar, who is a regional representative for Moms Stop The Harm, is promoting the national online group’s Purple Ribbon campaign.

She’s encouraging everyone to tie a purple ribbon at your home or workplace to support overdose awareness.

As well, during the weekend of Aug. 28th to 31st, Treloar is asking you to light up purple, by buying purple lights and lighting up your home and business.