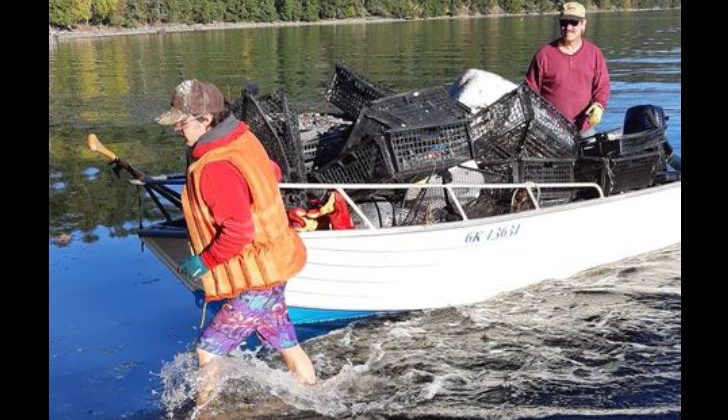 A local environmental group says the shellfish industry has to take responsibility in keeping our oceans and beaches clean.

They claim that almost all of it was from the shellfish industry in Baynes Sound.

Between 60 and 70 volunteers did this work during the last two weeks.

Over the last 16 years, volunteers have gathered approximately 78 tonnes from just our half of Baynes Sound’s shoreline.

“Because there is little monitoring and no consequences, too many shellfish growers don’t bother to collect their own plastic gear and garbage, which as most people know, contaminates these waters,” association chair Dorrie Woodward said.

Woodward also contends that the Department of Fisheries and Oceans has neglected the bulk of plastic debris that washes ashore.

In response,Fisheries and Oceans Canada (DFO) said it appreciates the work that the stewards have accomplished over the years to clean up plastic debris on local beaches.

It added that because of COVID-19 and associated health and safety protocols, DFO’s participation in this year’s clean-up was deferred.

The DFO is also in the process of updating the conditions for shellfish aquaculture licenses.

It says these changes will address marine debris concerns and improve the overall management of the shellfish aquaculture sector.

The DFO says its Aquaculture Conservation and Protection monitors for compliance of licence conditions for shellfish farms.

It added that anyone who contravenes the regulations may be charged with an offence under the Fisheries Act.

Meanwhile, Woodward says preventing plastic debris from piling up in marine habitat “should be something that we can all reasonably expect from shellfish growers.”

We have also reached out to the BC Shellfish Growers Association for a response.