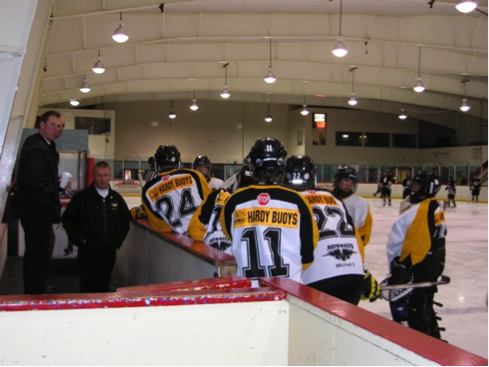 Players and coaches on the Ice of the Don Cruikshank Arena in Port Hardy, (photo provided by the District of Port Hardy)

It’s a Covid reality for amateur sports teams to perform without fans looking on, but one Vancouver Island community is going  to change that.

Port Hardy has come up with a creative way to bring fans into its arena to support its players, by using photos of the player’s family and friends.

The district’s Director of Engineering and Operations, Cam So says the idea actually came from pro sports teams.

“Basically we’re just trying to recreate what they’re doing in the major leagues. Different football games and hockey games they’ve been putting up pictures of fans because fans can’t be in the crowd so basically we’re asking anyone who wants to watch their kids play because they can’t be in the stadium to send us a picture, and we’ll post it up on some foam board and we’ll put you in the stands.”

He adds that the ‘foamboard fans’ will be a good spirit raiser for both players, and families during these uncertain times.

“I think everyone’s feeling really nervous these days and it’s a strange feeling that no one quite understands. I think this is just one activity that can contribute to your well being, because we can’t do it the way we used to do it, so this is like the next best step. The players can see their parents in the crowd, and the parents know that they’re looking down on their kids.”

If you are interested in getting your photo featured in the seats of the Don Cruikshank arena, the district is asking that you send them the highest resolution photo possible to pw@porthardy.ca.

If you would like more information, you’re encouraged to call the District of Port Hardy at 250-949-9779.