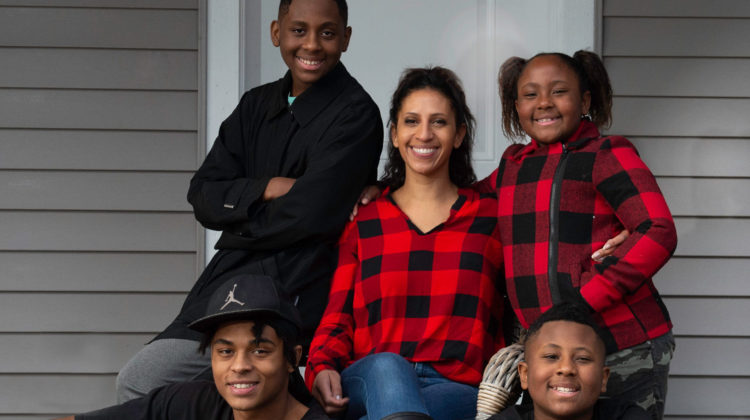 Temwa and her four children. (Supplied by Habitat For Humanity)

They recently moved into Habitat for Humanity homes in time to celebrate the holidays.

Temwa and her four children, and Kori and Cameron and their four children are the final homeowners to move into Habitat for Humanity Vancouver Island North’s (Habitat VIN) 10-home housing project at 1330 Lake Trail Road in Courtenay.

“Before partnering with Habitat, it seemed like no matter how hard I worked, or how hard I tried to advance myself academically, I was never able to get ahead,” explained Temwa, who works in healthcare.

Habitat homeowners volunteer up to 500 hours and pay an affordable mortgage – geared to their income – to buy their home.

Usually Habitat celebrates with a key ceremony to celebrate the families’ hard work and honour the volunteers and donors who made it possible, but due to health restrictions, they instead presented the families with symbolic gifts, an occasion they captured on video.

According to Karen McKinnon, Habitat VIN’s family services manager, the symbolic gift basket is full of items meant to “Remind [the families] of how far they’ve come, what they’ve accomplished, and the possibilities.”

“My mom’s hard work is really inspirational. She works a long hard job every day and then she would volunteer at the ReStore or on the build site just to get her house done for her kids,” said Jaiden, Temwa’s oldest son who described her as ‘his rock’. 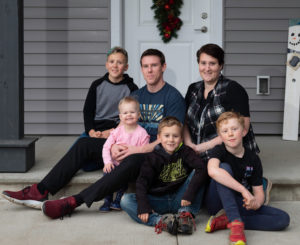 Kori and Cameron and their four children. (Supplied by Habitat For Humanity)

Kori and Cameron said that before Habitat they had to move twice because of landlords wanting to sell. They were troubled by the lack of affordable rentals in the Comox Valley.

“Now we don’t have to worry if rent is going to increase, or if our landlord is going to sell and change our lives,” Kori said.

Their family say they’re excited to cook in a kitchen with room to move around, and to live in a community alongside other Habitat families.

These two homes are the last of a total of 10 built at Lake Trail.

Both families say they’re grateful for the volunteers, donors, and entire community that came together to help make their homes a reality before the end of the year, despite major challenges from the pandemic.

COVID-19 caused a reduction in volunteerism and a loss in revenue from temporary ReStore closures in the spring.

Now, Habitat VIN is trying to raise $21,000 through their holiday matching campaign, in which Christoph Real Estate Group, Robbins & Company CPA, and Fresh Coast Investments are matching donations up to $10,500 until the end of the year.

They are currently seeking more Comox Valley families to apply to their affordable homeownership program.

Full qualifications and a short eligibility questionnaire can be found on their website habitatnorthisland.com/apply.