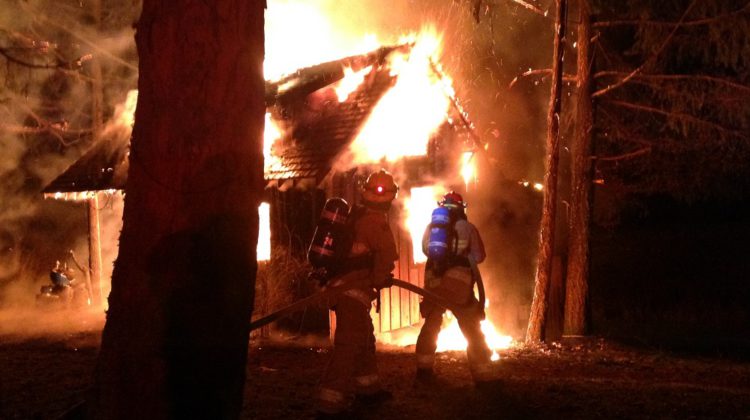 The heroic actions of two people likely saved a man from serious burns or even death in the Oyster River area.

The scene unfolded at around 7:30pm Saturday night when a fire broke out at a residential cabin on Salmon Point Road.

Oyster River Fire Chief Bruce Green says a quick-thinking neighbour and bed-and-breakfast guest pulled a man in his 40s out a back window.

“The one occupant who was in the building at the time was having trouble getting out a window and there were two citizens that helped him get out of the building safely,” Green explained. “He, unfortunately, suffered some burns but he’s lucky to be alive. If it wasn’t for those two people, I think we’d have a different outcome.”

“Unfortunately these events do happen and in this case, the resident of the cabin was extremely fortunate to have two people willing to risk their lives to save him,” added RCMP Const. Maury Tyre.

“I would like to thank these men for their courageous effort and as always, the volunteer firefighters from Oyster River who put their lives on hold to serve their community with professionalism.”

Oyster River Fire and RCMP investigators say the fire may have originated from the cabin’s chimney.

“That’s a possibility,” Green said. “We are going to go down there later today to do a complete, thorough investigation and then we’ll determine what the cause is.”

Green said the cabin is gutted inside but is still standing.

He added that the cabin didn’t seem to have a working smoke alarm.

“Definitely you need to sure you have a working smoke alarm in your house because that’s going to give you the extra time you need to get out safely.”