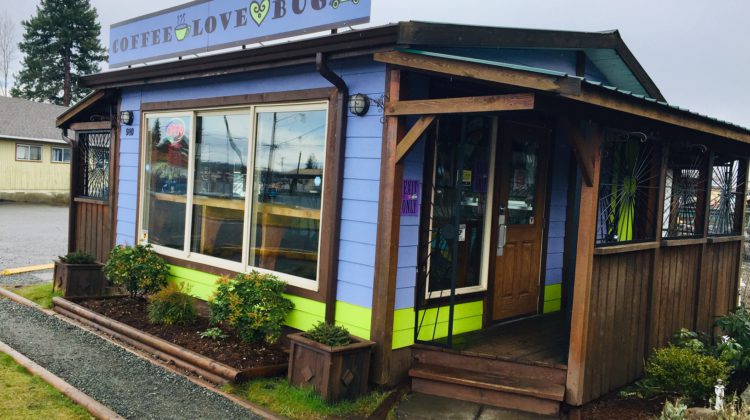 Staff at the Love Bug are thanking a stranger for saving the Courtenay café from serious fire damage.

Late Wednesday night, an unidentified woman stamped out a blaze that was deliberately set on the doorsteps of the coffee shop on Cumberland Road.

When owner Crystal Dunn opened the café Thursday morning, she came across a bundle of burned, crumpled up newspaper.

Long-time employee Halley Boldt said when they looked over their security footage, they saw a man push the newspapers against the stairs and then light them on fire.

“You can see the flames kind-of rip roar up, and it was a little disheartening to see cars that drove past in the video and nobody thought it was bizarre that someone was starting a fire in front of the Coffee Love Bug,” Boldt said.

Suddenly, a hero popped into view.

“Two minutes later you see this lady walk up, and she’s wearing a red plaid and you see she’s very concerned and she immediately starts stomping the fire out,” Boldt said. “She spends probably four solid minutes on the video making sure that this fire was totally out.”

Boldt added, “One minute I’m feeling so disheartened, all these cars driving by, nobody is stopping to help and then you see this lady, literally our hero, just walk into this video and save our little coffee shop.”

Boldt said during a time when everyone is on edge, it’s nice to see someone put herself in harm’s way to “save our little coffee shop.”

“We’ve been here for 15 years (and) it would have been pretty devastating.”

The Love Bug wants to publicly thank the unsung hero for saving the day, and if she pops in, give her something delicious on the house.

Meanwhile, Comox Valley RCMP Const. Monika Terragni confirmed that police have an open investigation regarding a small fire being deliberately set at the Love Bug on March 3rd.

“We are currently awaiting surveillance images of the suspect who has been described as a male.”