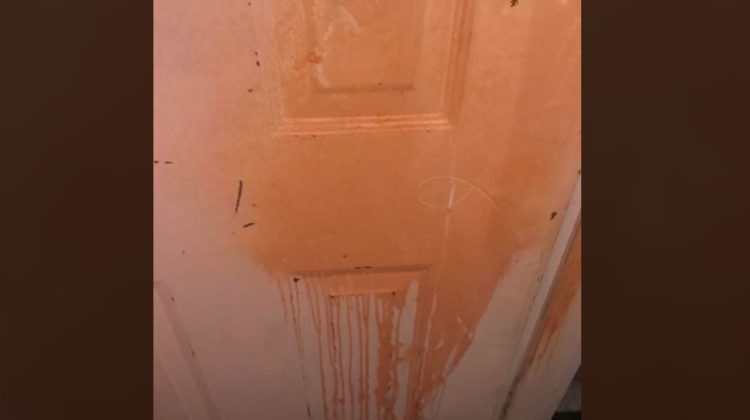 Bear spray covered the front door of a home that was vandalized in Campbell River. (Supplied by Caroline Grey)

A Campbell River family is on edge after being victimized by vandals.

Caroline Grey said that last Sunday night, they were woken up by the sound of their 2019 Dodge Ram pickup’s windows being smashed in.

After that, the vandals threw a brick and a weight into their basement window.

“Then they used bear spray in the interior of the truck and bear sprayed our front door,” Grey said.

“We have found out the make and model of the vehicle and also who the culprits were by witnesses coming forward.”

The vandals also doused bear spray on our front door before smashing out their downstairs window, which Grey said scared her 13-year-old daughter whose room is downstairs.

“We have a warranty for it but it will probably be a write-off because the damage that was done to the interior, the bear mace can’t come out. The bear mace soaked right through everything.”

She believes the attack was targeted but isn’t sure why.

Meanwhile, Grey says she’s still shaken and worried that they might come back. “My husband ran to the store the other night and I heard a noise downstairs and I freaked out and called the cops right away. I was pretty worried and I’m on edge.”

Campbell River RCMP Const. Maury Tyre confirmed that police are investigating the incident and “there is a person of interest.”