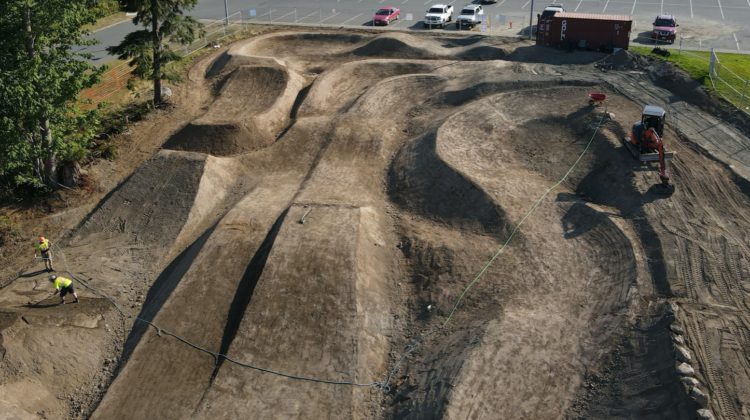 Good news for mountain bikers who don’t mind getting their wheels dirty.

The Campbell River Rotary Bike Park is fully up and rolling for the season.

The entire facility at Willow Point Park, next to the Sportsplex, reopened under sunny skies last Wednesday.

Campbell River Bike Park Society vice-president, Nicole Freeman, said the park wouldn’t have been possible if not for in-kind donations from community organizations.

“So many of the pieces, from the utility shed, to all of the clearing that we had to do because it was really forested before, was done with value-in-kind machinery and labour hours,” Freeman said. “It blew me away how much the community gave and supported this, considering it did take multiple stages and took quite some time.”

For safety reasons, a portion of the park was closed over the winter and early spring.

“So the last month or two, the City of Campbell River which is the owner/operator of the park now that it’s constructed, really just tried to get a handle on all the maintenance because it did take quite a beating over the wintertime,” Freeman said.

“Their design is untouched and it’s fantastic, we’re super happy with it and the community seems really happy with the lines they built,” Freeman said.

But the park actually had a “soft opening” in the middle of last summer, giving riders a half-season to enjoy the hills.

“(We) definitely had some roadblocks last year as we were trying to build the last phase of the park which was all of the dirt mountain bike tracks,” Freeman explained. “We did actually get those tracks opened in July despite the pandemic.”

Freeman said it’s turned out to be an amazing, family-friendly facility.

“We’ve been really intent on making sure that there’s a small kids zone at the very bottom of the dirt track which is really appropriate for little ones on their run bikes or anything like that, in addition to then having green, blue, and the black line which is the big jumps, so it’s catered so well to different abilities in town.”

She said the compact nature and sitelines of the park is good for families because it doesn’t feel so spread out.

“I’ve been amazed at the little guys I see ripping down the dirt track,” she added.