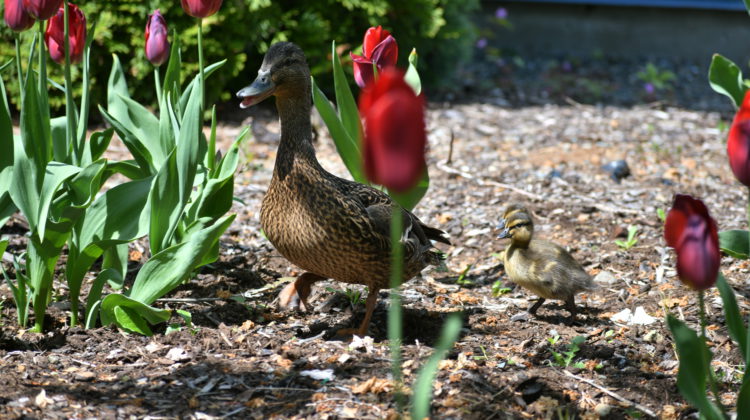 Mallard duck and one of her six ducklings. (Supplied by Comox Valley Schools)

It’s a graduation of sorts for six ducklings hatched at a Courtenay high school.

In early April, a Mallard duck had laid her eggs in the Mark R. Isfeld Secondary school courtyard. 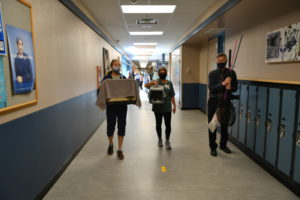 MARS volunteers carry away the kennels with the six ducklings in one and the mother duck in the other. After a long attempt using the aid of Isfeld staff the birds were safely gathered unharmed from Isfeld school courtyard. (Supplied by Comox Valley Schools)

Once the ducklings hatched, the family made it their home, before being transported by MARS Wildlife Rescue Centre volunteers to the Lazo Marsh area yesterday.

MARS manager of wildlife rehabilitation, Gylaine Andersen, says the ducks were healthy and ready to be rehomed, thanks to a lot of TLC from the school community.

“The school had been providing them with water and some food, so they were still in really good condition when we captured them,” she said.

When mom and her ducklings were finally discovered by two teachers, the school immediately got in touch with MARS.

A volunteer from the centre had uncovered four other unhatched eggs and decided it was more important not to relocate the mother and her ducklings.

In the meantime, the courtyard was closed to protect the area. Unfortunately, the other eggs didn’t hatch.

MARS had provided food and water dishes, to make the environment as comfortable as possible for the newly born ducklings.