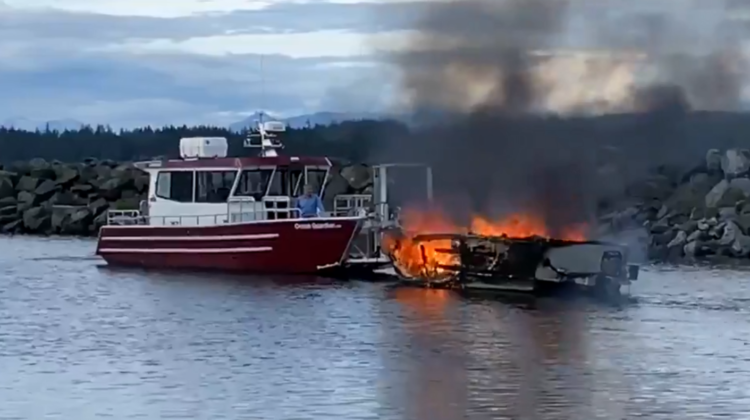 Two boats at Fisherman’s Wharf in Campbell River are no more, after they went up in flames and ended up sinking.

Campbell River’s Thomas Doherty tells Vista Radio the dispatch centre received numerous 911 calls of a boat on fire at the wharf near Fisherman’s Pier at around 6:25 pm yesterday (Tuesday).

However, it wasn’t just one boat ablaze – it was two. 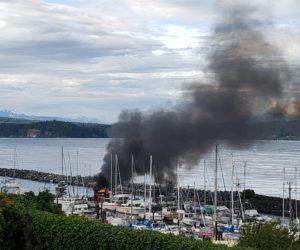 “On arrival, crews came across two pleasure crafts – a 16-foot and a 23-foot – that were fully involved in fire,” the fire chief says.

Doherty says one of the vessels was moved away from the dock by “the very aware mariner in the area,” which he notes “definitely helped to stop the fire from spreading.”

“Subsequently, the damage of the boats burnt down to the waterline and both of the vessels sank,” Doherty explains. “We deployed some hazmat booms around that to contain some of the debris and hazardous materials, and obviously notify the Coast Guard and the Ministry of Environment as well.”

Doherty says there are no injuries to report. He says fire crews remained on scene for a few hours to make sure no further damage occurred to the docks or other boats.

But he notes marina fires pose a bigger challenge for local fire crews because there’s no fire boat in Campbell River protecting the marinas.

“Coast Guard used to have that service, but all the fire fighting capabilities have been removed from Coast Guard. I don’t know the dates specifically, but I know it’s been quite some time now.”

Doherty says they’re now following up with the owner, and are investigating further into what may have caused the blaze.

“Apparently the same owner owned both vessels, so we’re doing some investigative work with him to see what may have caused it,” he explains.

However, it’s not uncommon for two boats to go up in flames at the same time. Depending on the marina and the setup, Doherty says boats can be tied up close together.

“So that creates some challenges,” he adds. “It’s not uncommon. We had one just a few months ago at another marina where two boats went up based on the proximity of the boats together.”