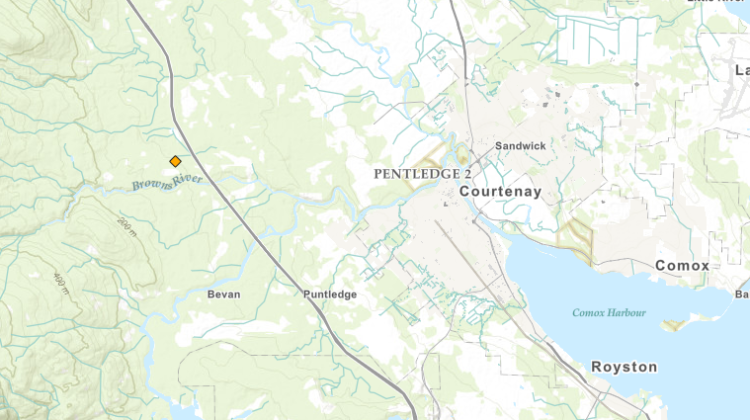 The orange dot on the BC Wildfire Dashboard shows the location of the Duncan Bay Main fire. (Supplied by BC Wildfire)

More wildfires are popping up in the Coastal Fire Center.

The region, which includes Vancouver Island and the Sunshine Coast, now has 14 active ones burning.

Information assistant, Gordon Robinson, says a quite a few of the new fires have been caused by Mother Nature.

“Most of the fires that we have going right now are lightning-caused,” Robinson said. “That cluster to the northeast of Harrison Lake is all suspected to be lightning-caused. Overall this year, we have had a higher than normal number of human-caused fires, but of the ones currently burning, it’s been mostly lightning.”

The latest one is the Duncan Bay Main fire west of Courtenay, which was called in at around 2:00am this morning.

According to the latest update from BC Wildfire, it’s believed to be human-caused. 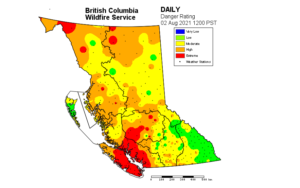 Fire danger rating in B.C. as of Aug. 2nd. Note that the red, which covers much of Vancouver Island and the Sunshine Coast, indicates an extreme rating. (Supplied by BC Wildfire)

“It’s burning in a large pile of organic waste,” Robinson said. “It’s being held right now, so with the current resources and under the forecasted conditions, it’s not expected to grow beyond the one hectare (that) it is right now.”

Meanwhile, Robinson says that while the expected rainfall later this week and into the weekend will be welcome, it won’t be nearly enough to dampen the fire danger risk, which sits at extreme across most of the region.

“Just because it’s raining, doesn’t mean the risk is over,” Robinson said.

“I really don’t want people to get complacent if we get a couple days of rain this weekend. It’ll take more than that to lower the risk.”

Since April 1st, 3,452 hectares have burned in the Coastal Fire Centre, which is only slightly above average for this time of the year.

However, Robinson says the 163 fires reported so far is well above normal.

“An average year would be around 98 at this point,” he added. “And especially human-caused. We’ve had about double the average for human caused fires this year. I do want to thank people for being observant and for calling those fires in, or when they see something, or if they see a column of smoke. It makes a big difference. It really allows our initial attack crews to get their quickly and contain fires before they have a chance to grow.”