Campers moved out of Courtenay Airpark 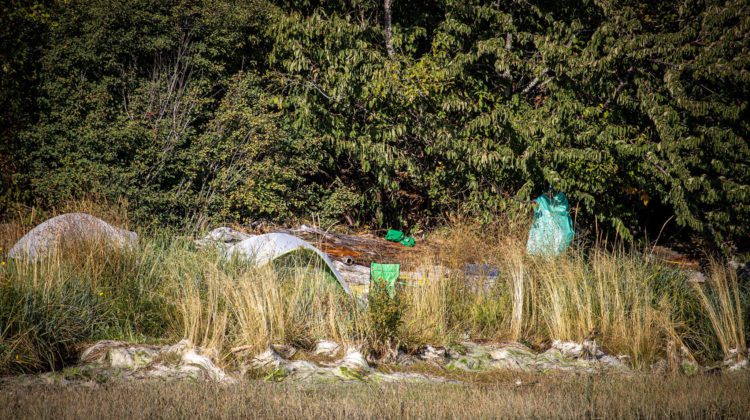 Photo shows tents set up at the Courtenay Airpark, reportedly in the bird nesting grounds. Supplied by Raymond Champagne, Facebook

The Comox Valley RCMP continues to be on the lookout for campers putting down stakes in public areas around the valley.

Const. Monika Terragni says that on Wednesday morning, officers came across a small camp with one tent at the Airpark.

She added that the occupants agreed to pack up and move out.

Terragni noted that the Supreme Court of B.C. has allowed people to camp in parks overnight; so long as their camp is all cleaned up in the morning.

According to Terragni, the City of Courtenay Bylaw enforcement officers and Comox Valley RCMP ‘work together closely to ensure tents are cleaned up and garbage is collected on a regular basis.’

Terragni also said that police are aware of Facebook posts regarding issues within our community.

“However, a Facebook post is not a police report. Suspicious behaviour, drinking alcohol or consuming drugs in public, and disturbing the peace can all be reported to police and should certainly be reported if they are affecting the enjoyment of our local parks. We all need to work together to ensure that everyone has a safe place to stay and safe parks to enjoy,” she explained.

This wasn’t the first time a camp had been broken up at the Airpark.

Back on Aug. 4th, the Comox Valley RCMP received a report that there was one set up near the birdwatching area on the Airpark trail.

“Officers attended, spoke with the people who had set up tents, and arrangements were made to take them down,” Terragni said.

Since then, Terragni said police have not received any reports about new camps being set up at the Airpark or this camp continuing to exist and/or grow.

“The Comox Valley RCMP Frontline members and Bike Unit members make regular patrols through areas where people have been reported camping or have been known to camp,” Terragni added.

We have reached out to the City of Courtenay’s bylaw department for their views.