Rescued cat on mend in Comox, after outpouring of generosity 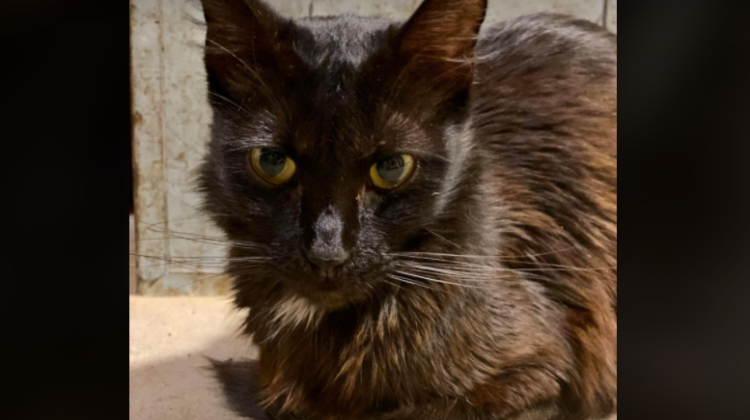 A Comox Valley cat has some guardian angels looking over it.

Tara Lyon says her husband, Al, was walking their dog in Comox’s Northeast Woods last Wednesday, when he came across what he thought was a discarded sweater on one of the trails.

As he got closer, Al saw it was a cat in distress.

“She was laying flat out, like she had basically given up, so had the dog so he basically moved the dog away a bit, she lifted her head and kind of hissed at the dog,” Lyon shared.

Lyon drove there and took the cat home, and the couple kept her overnight.

The cat, renamed Mocha, was dehydrated and emaciated, and had an injured left front paw that was so infected, it was full of maggots.

“She’s so skinny, when you touch her stomach, there’s nothing there. She’s just all bones. Her backside is bones,” Lyon said.

Lyon said they tracked down the cat’s previous owner through a tattoo on one of its ears. According to Lyon, the person told her that they didn’t want the responsibility and had dropped the cat off because they thought it could fend for itself.

The next morning, they dropped Mocha off at the Comox Valley Animal Hospital, where she was given fluids and antibiotics, and they cleaned the wound.

Mocha came back to her new home, and along with her came a hefty vet bill to the tune of just over $700.

That’s where the public comes in.

After Lyon put a post up on a community Facebook page, they were urged to create a GoFundMe page that ended up generating $837 dollars, which covered the expenses and then some.

Lyon said she was floored by the generosity.

“To be honest, I had no intention of doing that, that’s really not what my post was about,” she said.

“I was just so angry that this happened to this cat, and I put up my spiel, and then people started private messaging me, saying ‘Put up a GoFundMe, put up a GoFundMe,’ we’ll donate money. I was kind of embarrassed and kind of overwhelmed but I figured out how to do it, and I did it, and the wonderful people in this valley chipped in and paid the vet bill.”

Lyon said any extra money beyond the original vet bill will go towards Mochas vaccines.

Mocha is now in a quiet room separate from the couple’s 130-pound Irish Wolfhound cross, which is not really cat-friendly, and Lyon said “this cat has been through enough trauma.”

They are trying to figure out next steps, but

Lyon also has a message to anyone who needs to get rid of a pet for any reason.

“There are many rescues out there willing to help.”