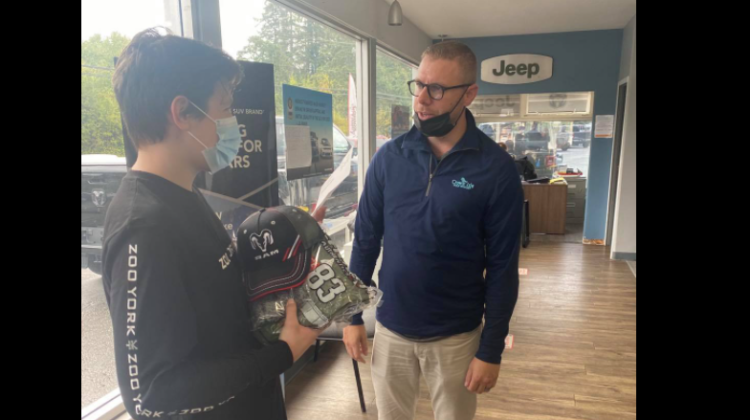 Brian Morrison is being credited for helping save two people from drug overdoses this month.

In both cases, Brian overcame his extreme anxiety to get help.

When the staff at Comox Valley Dodge heard about Brian’s heroics, they rewarded him with some swag, $100 dollars, and the invite for a future job opportunity.

“One (overdose) was at a fast food restaurant in a bathroom and the other was, the individual OD’d on the sidewalk, there, and Brian was just at the right place at the right time and Nikki has done a great job of helping the young fellow out on training, and what to do and how to react, and for a 13-year-old that was quite amazing to see.”

Grant said they wanted to highlight Brian’s courage, which is why he was invited to the dealership to receive the gifts.

He said what was most surprising was Brian’s age: “He’s only 13 years old and Nikki has done such a fantastic job with him and raising him the right way. He’s a quiet guy and we just wanted to make sure that he understood the great things he’s done so far, and we encourage him to keep on learning and keep on adapting as he progresses through life. It seems he is on a great path.”

Grant lost his brother to a drug overdose and says Brian’s quick actions underscores the importance of things like Naloxone training.