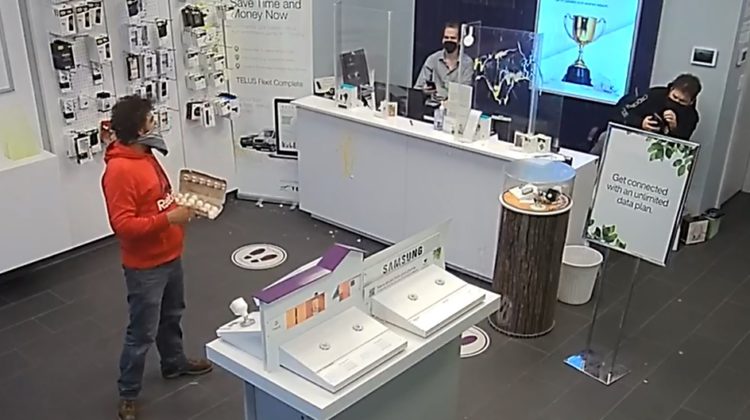 A messy situation at a Vancouver Island cellphone store.

Over the weekend, staff at Quinsam Communications in Campbell River were left ‘walking on eggshells’ after a man came in and started throwing eggs at displays, merchandise, and the workers themselves.

According to sales consultant Cody Spetifore, the Saturday (Oct. 16) incident lasted about two minutes and left him and his coworker “dumbfounded.”

Spetifore says the man entered the store, located within Discovery Harbour Shopping Centre, at 5:00 pm. He was “fairly irate” with a carton of eggs in his hands.

“We weren’t completely sure what was going on at first,” Spetifore tells Vista Radio.

“Later on, he was talking about 5G, and then we realized that’s what he was mad about. I think he thinks that Telus was spying on him, or we were going through his devices.”

But Spetifore notes that the store isn’t actually owned by Telus, it just sells Telus products.

“Essentially, he just came in and egged a small local business which has nothing to do with the network,” explains Spetifore.

As well, he says the mess meant staff couldn’t welcome customers into the store at all on Monday, resulting in a loss of business. “Monday’s usually a really busy day for us,” Spedifore says.

After the egg thrower fled, Spedifore called the police. He says the man ran out the door, jumped into a car and took off.

At the end of the day, for Spetifore, the incident was “a weird thing to happen.”

“In retail, you’re going to have aggravated customers occasionally,” he adds. “But neither of us really knew what to do when he came in. We weren’t scared, we weren’t angry. It was just a ‘what’s going on?’ moment.”