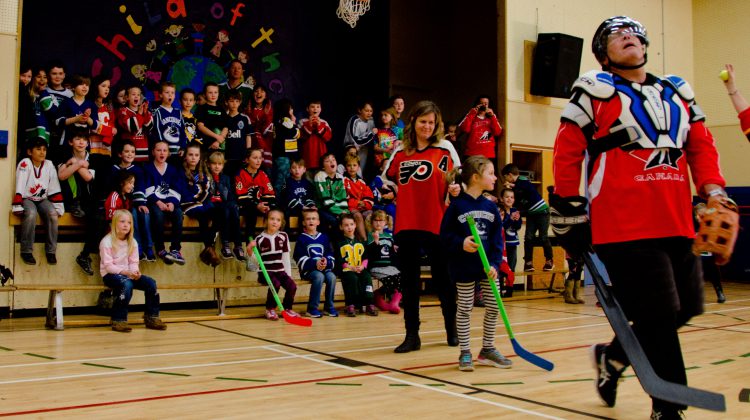 Arden Elementary Principal Brian Goodwin reacts to a goal being scored on him.

COURTENAY B.C –Schools in the Comox Valley rallied students, teachers and parents alike to show support for those affected by the bus crash in Saskatchewan last week.

A bus carrying the Humbolt Broncos, a Saskatchewan Junior Hockey team, collided with a transport truck on April 6th, killing 16 and injuring 13 more.

At Arden Elementary in Courtenay, Principal Brian Goodwin tended goal as students got a chance to score on him.

For every goal scored Goodwin will donate one dollar to the Humbolt Broncos Gofundme.

Since last week, the Gofundme has received over $9.5 million dollars in donations.

While dressed in a jersey and goalie gear, Goodwin told 98.9 The Goat that roughly three quarters of the students were wearing jerseys.

But it wasn’t only students wearing jerseys today.

“It’s been fantastic, the staff and the kids are all excited, they all showed up in their jerseys, some people brought in extras so everyone would have a jersey to wear,” said Robert Russell

Atkinson, a teacher at Arden Elementary. He wore a jersey he used wear when he played junior hockey.

Parents came to show their support as well.

“I’m wearing my jersey here today to help my son learn how it is to be a community, it doesn’t matter how small or how large of a town you come from,” said Chamela Smith, a parent of an Arden student.

“We’re a community in Canada and I’d like him to know that the rest of Canada would support us if we were to go through the same type of tragedy.”

The students at Arden had messages for the community of Humbolt.

“Be close to your family for this day. This day is for the team that passed away,” said Jake Perry.

“I think it’s really sad and like being a child I think it would be sad, having someone tell you that your kid died. What would you do? If somebody told my mom that I died in a car accident, my mom would be freaking out,” said Harissa Saunders, a student at Arden Elementary

“Things happen for a reason, we just don’t know what that reason is yet.”