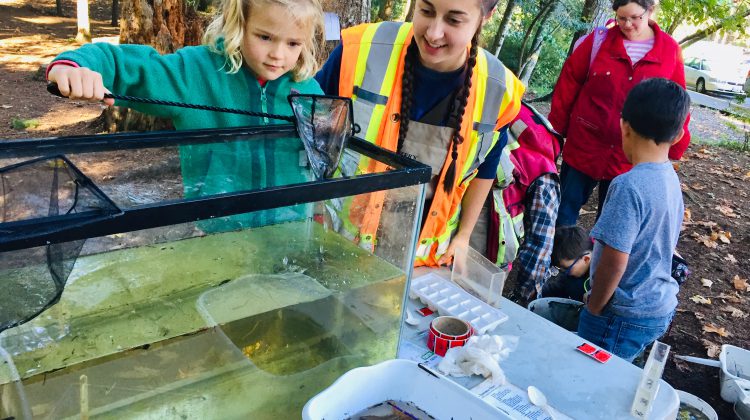 The 3rd annual Salmon Day at École Puntledge follows up on the success of last year’s format, combining an after-school public event with an open house for parents and families.

The free, all-ages event opened with an Indigenous welcome and included musical acts by children and a serving of smoked salmon for visitors.

École Puntledge principal Stéphane LeBlanc said the day celebrates the environment as well as an area that he said has a “rich” connection between salmon and the local watershed.

“We also wanted to bring more learning about salmon into the classroom, so we have our salmon-day activities here after school. We also have a lot of these exhibitors come into classrooms and do salmon dissection.”

Morrison Creek Stream Keepers conducted spawning tours during the event to educate spectators about the remarkable annual salmon migration into the headwaters and how the creek channels are maintained.

Morrison Creek is one of the most active spawning streams in the Valley, which crosses the school’s property only steps from the front door.

While wandering the school grounds, visitors had an opportunity to view a unique mural created by Tracy Kobus, depicting Coho heading upstream in a setting of Maples and Douglas fir, along with ravens, tree frogs and the Morrison Creek lamprey.

Salmon-themed artwork created by students was also on display inside the school.