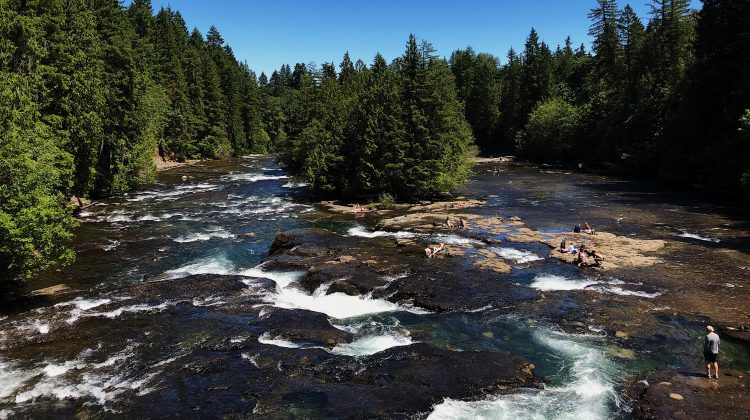 COURTENAY, B.C- A long-running dispute in the Comox Valley is gearing up for another round in court this March.

3L Developments Inc and the Comox Valley Regional District will be in court in Vancouver from March 12th to March 15th, where the company is hoping to see an overturning of the district’s decision to deny an application to change the district’s Regional Growth Strategy.

The company is looking to develop lands located close to Stotan Falls, a popular swimming spot for locals and visitors along the Puntledge River.

In January, the company announced a closure of all their lands near Courtenay.

Located near the Duncan Bay Main bridge crossing the Puntledge River and along parts of the river’s course, the area contains the Stotan Falls.

Last October, the company filed a petition to the Supreme Court of British Columbia, asking for the Comox Valley Regional District’s denial of an application to amend the area’s Regional Growth Strategy (RGS) to be set aside.

The CVRD filed a response to that petition. It disagreed with every point raised by the company.

The company has now adjusted their petition, taking issue with additional stages of the process that led up to the October meeting, how the meeting was conducted, and how the district handled consultation for the amendment application with other stakeholders, specifically the Wei Wai Kum First Nation.

Of note in their amended petition is concern over the way a recess in the October 2nd meeting was handled.

The company described the recess as an “in-camera meeting” which hadn’t been voted on by the board to be held, involving CVRD staff, then-board chair Bruce Joliffe, and “other board members”, without all the members of the board present.

Former board member and former Courtenay mayor Larry Jangula is now listed on the company’s amended petition as having given an affidavit, which is now “material to be relied upon” by 3L.

The MyComoxValleyNow.com newsroom reached out to Jangula about his affidavit. He declined to comment.

The district has filed a response to 3L’s amended petition, which claims that consultation with stakeholders was conducted, though letters to the Wei Wai Kum First Nation and Homalco Indian Band were addressed to the former and not current chiefs of those respective nations.

The CVRD response also deals with the “in-camera meeting” claim by the CVRD, stating that senior CVRD staff met only with Joliffe and then-vice chair Bob Wells to work out procedural issues. It includes a mention of the district’s view on a point raised by Jangula during the meeting on October 2nd, when he had said that it could be inappropriate for the board to consider the amendment given the upcoming local election.

He did not make a formal motion to defer consideration at the time. 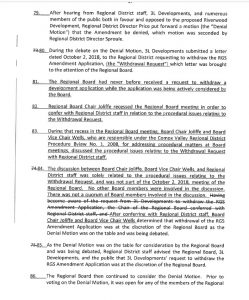 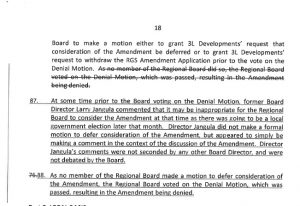 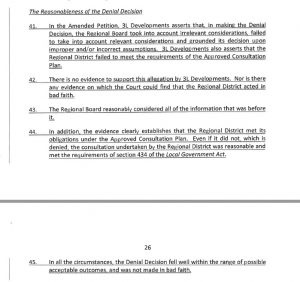 As for how much the legal process will cost the district, CAO Russell Dyson said that a total of $80,000 has been set aside for the Regional Growth Service in 2019, after a 2018 deficit of $62,142 caused by previous court action.

The $80,000 sum was also the best estimate by the district’s legal advisors, and could go higher.

“We’re budgeting for that because we have a scheduled court date coming up in March and also anticipating the possibility of there being an appeal for any decision that might be forthcoming,” said Dyson.

A minimal amount has been spent in that budget so far in 2019.

As for the company’s views about the October 2nd meeting process, Dyson said that the consideration of the amendment application by the regional district was done above board, in public meetings, with no in-camera meetings.

He also touched on the district’s view of the RGS, saying it was a “foundational document” that protected the region and community interests.

“It helps define growth for generations to come, and the regional district is standing behind its regional growth strategy.”