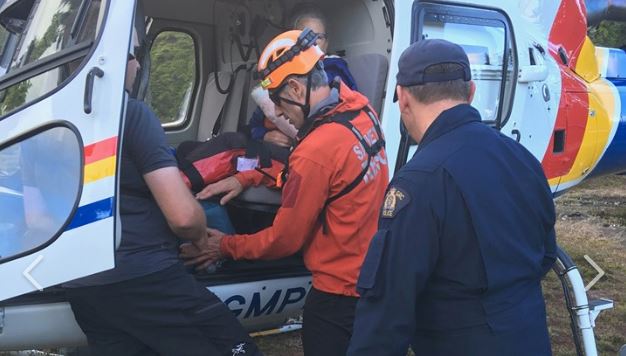 An injured hiker was put into an RCMP helicopter and flown to a waiting ambulance at the Courtenay Airpark on Monday, June 17th, 2019. (supplied by Comox Valley Search and Rescue, Facebook)

On Monday, they were called to back-to-back rescues.

The first was in Strathcona Park, where they helped a pair of stranded hikers.

The BC RCMP‘s Air-8 flew a SAR team near Kwai Lake and found the hikers, one of whom was a woman who had suffered a broken ankle and an injured knee.

Comox Valley SAR president Paul Berry said the two hikers were “well prepared and well planned and did have a satellite emergency beacon.”

Berry said an RCMP helicopter was able to land about 200 metres away from the hikers.

“We stabilized her injuries, loaded her into the helicopter and flew her to meet BC Ambulance at the Airpark,” he said.

A second team was staging at the Mt. Washington Nordic lodge, in case the hikers weren’t found, or weather prevented a helicopter rescue.

Just as they were about to go home from that rescue, a second call came in about a pair of teenagers trapped on an island on the Puntledge River by rising tides.

The tourists from Alberta were taken safely to shore via kayaks.

“They weren’t in any immediate danger,” Berry said. “So it was just a matter of getting our guys geared up and a couple of our kayaks paddling over and plucking them (from the island).”

Berry said this was the third call to SAR in the last month-and-a-half, for visitors to the valley who were “completely unaware of tides.”

“And (they) venture out and then get caught by rising tides, unaware that that’s going to happen,” he said. “I don’t know that there’s much you can do about that except to remind everyone that they should be aware of their surroundings and aware of changing conditions no matter what environment they’re in,” he said.