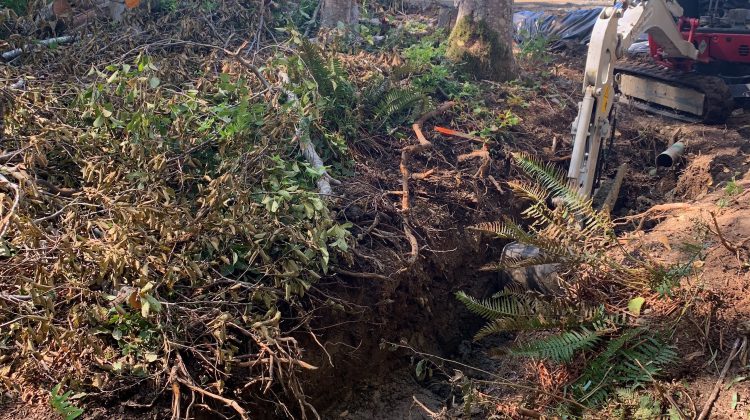 BC Hydro is remediating their old District Office lands off of Evergreen Road. This shows the remediation work within an old drainage area that fed into Nunns Creek, and the old pole yard in the background. (supplied by BC Hydro)

BC Hydro is doing a major cleanup at the Evergreen Road site.

Crews will be cleaning up soils impacted from historical operations.

The site was once known as the Campbell River District Office.

It was used by BC Hydro designers, vegetation maintenance coordinators, and power line technicians for about four decades in keeping the lights on within Campbell River and beyond.

Hydro closed down the office in 2015 and moved operations to Quinsam Crossing.

BC Hydro spokesperson Stephen Watson said the crown corporation is looking to sell the 10-acre property at fair market value.

He noted that the first step was selling the unused five-acre forested section to BC Transit.

“Over the past few years we’ve been looking at cleaning up our old site storage lands, and that remediation work started around mid-August. Once done, we will then look to divest of the remaining five acres of land,” Watson said.

A back portion of the five-acre property was used for storage – everything from poles to transformers.

After a site assessment found some contamination, BC Hydro committed to cleaning up the affected area.

Most of the contamination is metals and pentachlorophenol.

Some of the area cleaned-up includes a very short three-metre section of Nunns Creek.

“Sediment samples collected about 10 metres downstream of the area that had elevated arsenic met applicable environmental standards, so the extent of the off-migration is not far from our property,” said Watson.

The clean-up is expected to take about four weeks.

Tervita is the contractor doing the work.

The contaminated soils were shallow and involved the scraping out of the soil to about 30 cm of depth.

A total of about 1,500 tonnes of contaminated material will be removed.

A hydrovac was used within the Nunns Creek area to limit the disturbance, although BC Hydro is working within the summer fisheries in-stream work window of Aug. 15 to Sept. 15.

There will then be some site restoration and planting.

All removed contaminated soils will be properly disposed at an approved facility.

Watson says Hydro has been working with the BC Ministry of Environment, Department of Fisheries and Oceans Canada, and the City of Campbell River, which has some City staff leasing the old office complex.

The office complex area is not affected by the remediation work