Wet first half of September across Vancouver Island, Sunshine Coast 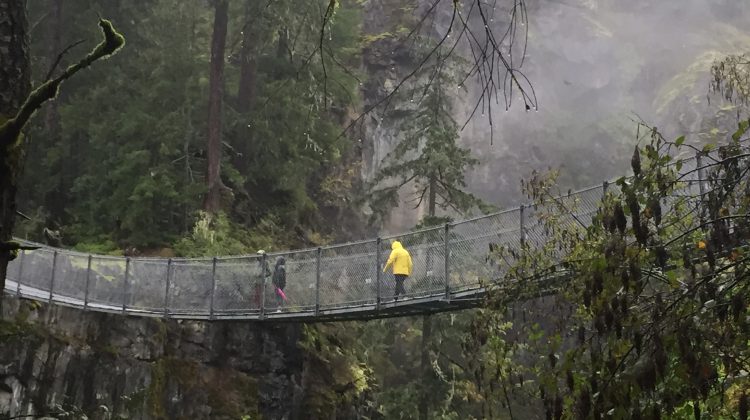 Visitors to Elk Falls in Campbell River made their way across the suspension bridge as the rain poured down on Saturday, September 14th, 2019. (Troy Landreville, MyComoxValleyNow.com staff)

We’re just starting to dry off after an epic stretch of rain across Vancouver Island and the Sunshine Coast.

Port Hardy and Powell River are already well on their way to exceeding their total rainfall for the month.

Two systems brought 20 to 30 mm of rain to Powell River over the past few days. That brings the monthly total to 47.5 mm, which is 86 percent of its historical average of 55 mm.

Port Hardy is always a wetter spot on the island and its historical average for September is 109 mm. The district has already picked up 72.8 mm which works out to 67 percent of average rain so far, this month.

And while the rainfall totals are smaller on the central island, they’re still significant.

The Comox Valley Airport recorded 29.8 mm so far this month. The historical average for the valley is 42 mm so it’s at 70 percent of normal precipitation for September.

Campbell River has seen 25.6 mm, which is roughly on pace to its historical average of 55 mm.

“Particularly on Thursday we saw some intense downpours,” he said. “Rainfall rates of four to five millimetres an hour. Those are the points when the umbrella starts to fail you. And then with this cold front that pushed through Saturday afternoon into Saturday evening we saw another round of heavy rain so it’s been a really wet start to September. It feels like October weather.”

MacDonald said typically, we’ll see 50 to 60 mm in rain but those numbers double as we get into October.

“It seems like we’re seeing more of an October-like pattern this year,” he said.

There has been a lot of “embedded convection” in the atmosphere, MacDonald said: “So (they’re) these thunderstorm-like clouds that just really intense downpours. The atmosphere has been really unstable here for the last week.”

MacDonald said cold air aloft combined with sea surface temperatures that are quite warm is the recipe for very wet conditions.

“When you have a warm surface with cold air in the upper atmosphere, that creates a very unstable atmosphere and we get lots of vertical motion and that leads to thunderstorm-like clouds.”

Given how dry it was in August, particularly in the southeast corner of the island, that’s not a bad thing, said MacDonald.

“I think this rainfall is mostly welcome.”

It’s expected to dry up on Wednesday and the rain should hold off until the weekend.

But don’t put away your umbrella just yet. The long-range forecast calls for another system to push through on Sunday, bringing with it about four more days of showery weather.