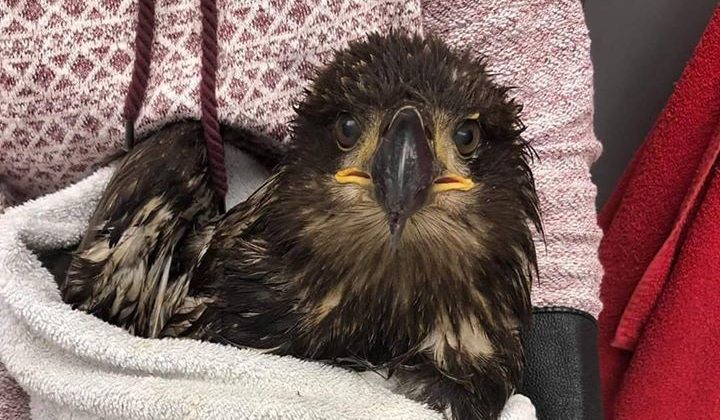 The society has rescued three eagles since the start of the year and Assistant Manager of Wildlife Rehabilitation, Kiersten Shyian says all three had lead in their system.

“Our first patient of the year was a bald eagle that came from Campbell River in the Ocean Grove area and he did have lead poisoning. We got one in on the 13th from Alert Bay that was also lead poisoned, and unfortunately, he did not survive.”

“We got another one from Courtenay on the 10th who was found just off of Huband Road in somebody’s yard. I went and picked him up and he was audibly wheezing and stuff so I immediately suspected lead poisoning and then once we got him back we did some lead tests on him and his lead readings were so high they didn’t register on the machine, ” Shyian adds.

She says the cause of the high levels could be from a variety of things but are most likely from deer hunters who leave their animal behind.

“A lot of the times we can’t tell for sure what the lead poisoning was. It’s usually lead shot from deer carcasses that have been left behind or ducks that they’ve eaten. Mostly they’re just eating deer carcasses that people haven’t pulled out of the bush that still have lead in them.”

Shyian says even if the team manages to bring in the poisoned birds, the chance of them getting rehabilitated to full health is quite low.

“Usually we try to treat most things that we can find but sometimes, depending on the state of the bird and how their lead reading goes, it might just be a case where you have to euthanize right away because that’s what’s best for the bird.”

“We also don’t have a super high success rate once they are leaded because by the time he gets to us he’s already too far gone internally. Even though he may seem okay on the outside, the lead is really doing a number on his insides. It’s difficult especially since we see so many of these cases, it really takes a toll on emotions here.”

MARS is currently in the process of building an eagle enclosure to help rehabilitate injured birds and it’s planned to open in the next few months.