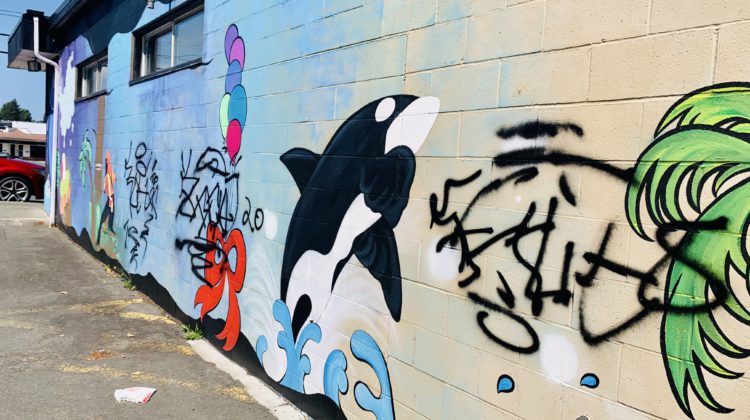 A Willow Point mural is the latest target of vandalism in Campbell River.

Sometime this past weekend, Cindy McLean says, a mural on the outside of her building on the corner of Westgate Road and Highway 19A was spray-painted over with black lines and scribbles.

“It just makes me sad that we’re out there trying to make this place look better, and these kids come along and just think it’s ‘cool’ to try and do stuff like this,” she says.

McLean has co-owned the building alongside her husband for a few years now.

“We did numerous upgrades to it, including having that wall painted,” she says.

This isn’t the first act of vandalism in town this month.

Taggers spray-painted much of Nunn’s Creek Park playground and bathrooms over the BC Day long weekend.

McLean adds that she’s reached out to police.

She’s now focused on fixing the wall and restoring it back to its original ocean scene.

“I’m actually going to go out there. I have a little bit of artistic talent, not a lot. I’ll probably touch it up for now.”